The Case Against Joe Calzaghe 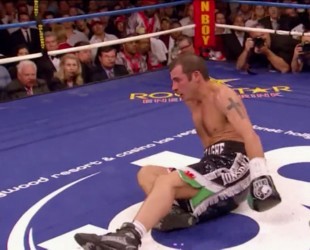 By M.T.H: Joe Calzaghe was one of the top five fighters that the small British principality of Wales has ever produced. He was a long reigning world title holder who staked a claim as arguably the best British Super-Middleweight of the last twenty years. Calzaghe’s life at the highest level of the sport began way back in 1997 when he faced former world title holder Chris Eubank for the lightly regarded WBO belt.

Eubank was an aging fighter whose best days were well behind him. He had recently been campaigning in the Cruiser-Weight division and was struggling to make the 168lbs Super-Middleweight limit. Eubank had taken the fight with Calzaghe on extremely short notice. Despite being weight drained and at the end of his career, Eubank managed to go the distance with Calzaghe, and often hurt him with vicious shots to the body. This was the first in a long career of opportunistic victories for Joe Calzaghe…..

In his next fights Calzaghe overcame a late replacement, Branko Sobot, and a 39 year old from Paraguay who would go on to finish his career with a 61-14-4 record. Calzaghe’s first real challenge came in 1999 when he faced former belt holder and domestic rival, Robin Reid. Calzaghe struggled to overcome the wily Reid, and was lucky to be awarded the victory by the judges in a fight some feel Calzaghe actually lost.

It seems that Calzaghe was a contented Champion. He hung on to his WBO belt for 10 years, and made 21 successful defences against opposition that was often lowly and illegitimate. Although former world title holders like Byron Mitchell, Ritche Woodhall and Charles Brewer, as well as good domestic fighters like David Starie did provide more credible opponents for the Welshman.

Many of Calzaghe’s opponents showed no desire to win the fight, and some even seemed flabbergasted to have got the opportunity to fight for a world title. In 2001 Calzaghe did actually face a legitimate contender in unbeaten German fighter, Mario Veit. Calzaghe utterly outclassed and stopped him in the first round. Calzaghe’s career seemed to be in an embarrassing holding pattern when four years later Veit was given a rematch. The fight ended in a similar fashion with Calzaghe again winning a knock out victory.

It took the best part of a decade for Team Calzaghe to secure their fighter a career defining fight. When it eventually came, the opponent was one Jeff ‘Left Hook’ Lacy. Lacy was an unbeaten IBF belt holder. He came with a fearsome reputation. Although the fact that Lacy had previously struggled to overcome lowly opposition in the fights leading up to Calzaghe, perhaps meant that that reputation was somewhat inflated or perhaps even entirely unwarranted. Calzaghe thoroughly dominated Lacy and won via a wide unanimous decision. Calzaghe had now unified the IBF and WBO world title belts.

(Jeff Lacy has done nothing of note in the four years since his loss to Calzaghe, which only serves to reassert his hype-job status).

Resting on his laurels after the Lacy success, Calzaghe then defeated Reality TV show stars Peter Manfredo Jr. and Sakio Bika in his next two fights. Seemingly reluctantly Calzaghe then stepped up in class and signed a contract to fight the unbeaten, but unproven at the elite level, Mikkel Kessler.

Early in the fight Calzaghe struggled to overcome the one-dimensional Dane, but once the Welshman found his rhythm he managed to edge the fight. With this victory Calzaghe had unified the Super-Middleweight division, it had taken him over a decade, and in that time he had only faced a handful of credible opponents. This would be the last time that Calzaghe won a legitimate world title(s).

Calzaghe was a notorious stay-at-home fighter. He seemed reluctant to travel. All but five of his forty six fights took place in Great Britain. Only two took place in America. Calzaghe did somehow eventually manage to find his passport and the courage to face ring legend Bernard Hopkins in Las Vegas for The Ring Magazine’s Light-Heavyweight title. Hopkins was approaching his mid forties and had lost two of his last four fights.

Despite this, Hopkins was able to give Calzaghe all kinds of problems, even dropping him in the first round. But because Calzaghe was the younger and fresher man, he was able to outwork the aging legend. However, Hopkins still landed the cleaner and more meaningful shots throughout the fight. The judges awarded Calzaghe a split decision victory; in a fight that a significant numbers of people felt that he lost.

Calzaghe was a notorious complainer. He would often complain that many of the top fighters would refuse to step in the ring with him. Having now defeated an American Legend and having fought on US television networks several times, Calzaghe was an established name.

He had the opportunity to take his pick of opponents. Many thought Calzaghe would face an unbeaten young champion like Chad Dawson or Kelly Pavlik, to cement his legacy. And despite being on record as saying that Roy Jones was ‘shot’ and ‘not worth fighting’ Calzaghe instead opted for the easy option of a fight with the ancient and decrepit Roy Jones Jr.

After twelve agonizing rounds of cringe worthy showboating, the “fight” was thankfully over. Calzaghe had won a decision that meant nothing and proved little. And with very little fanfare, Calzaghe announced that he was hanging up the gloves. Despite the questions that remained unanswered.