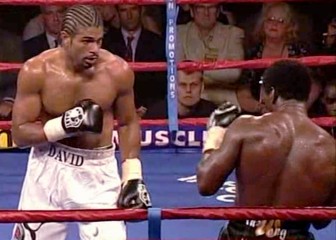 By Harlan Davies: After all the excitement, hype and hysteria surrounding the Haye/Klitschko fight, it finally fell through with Haye pulling out with a back injury. Their relations soured so Haye has found himself a new opponent coming in the form of the 7’2 foot WBA heavyweight champion Valuev and their fight is scheduled for November. So the new question is can Haye snatch the belt from the Russian Giant and help rebuild a faltering division?

This is a completely different prospect for the former undisputed cruiserweight champ. Valuev stands 7 ft tall and weighed in at 310 pounds at his last fight with Holyfield. Nikolay’s main attribute obviously remains to be his sheer size which gives him distinct height and reach advantages over opponents. He has a 7 inch reach advantage and 9 inch height advantage over Haye so this makes it easier for him to box Haye from range which could easily frustrate Haye.

Also, his stature makes him an overwhelming physical force in ring making it easy for him to march forward and smother the under-sized opponent. As far as boxing ability goes, Valuev is nothing special at all, his speed is below average and his power remains a threat but he has been taken the distance in his last 5 fights so it might be a sign that he is now using a more safety-first style which would be lending a very helpful hand to Haye’s fragile chin.

Valuev’s chin seems to be asset with him not being knocked out once in 51 pro fights and it goes for any fighter that if you can go 12 rounds on your feet, your still a danger to anyone.

So it looks like Haye is in this one for a long 12 rounder if he wants to beat him. Haye’s main advantage is his sizzling speed which he uses to perfection to construct his knockouts. His handspeed will allow him to catch the Valuev when he steps in close enough but he will have to lunge in and out to avoid getting caught by Valuev’s long sweeping punches. Haye’s power has unquestionably been brought up to heavyweight and he has proven in the past that he can change fights with on, well-placed right-hand.

His power however, in this fight may be already utilised because Valuev’s chin and size advantages. As I stated above, Haye’s chin is shaky and he himself openly admits this Achilles heel especially at heavyweight. There’s less danger though of it being exposed in this fight as opposed to the Klitschko fight. David will need to tighten up on his defence and use his natural agility to avoid Valuev landing any his wallops because Haye loves to dangle his left hand low making him susceptible to a big right.

So the key to success for Haye is to use his explosive speed. He will have to fight in bursts then back of before Valuev has time to pull the trigger on his own punches. Haye will probably have to keep this up for 12 rounds and I do think he has the ability to beat Valuev.

Pound for pound Valuev is an average boxer at best but has managed to ride upon his physical dimensions to win fights in a division lacking talent. I admit that I do personally hope Haye can pull this one off so he can bring back the belt from Eastern Europe where Valuev enjoys making his safe and monotonous defences of his title. After all, I’m a boxing fan and I want to see exciting fights, Haye brings excitement in heaps, Valuev doesn’t. He can help inject some life into a division that is having a serious drought of talent.

If he is able to capture the title then we can be more or less guaranteed juicier fights in the future. Boxing at the end of the day is a sport which values entertainment as highly as skill as far as fans are concerned. Haye is the man that could bring back a bit of life to the division and even if his title reign does not last long at least he shook up the foundations.

The Case Against Joe Calzaghe »