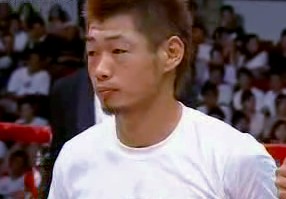 By Jason Kim: Forget about Joseph Agbeko, the best fighter in the bantamweight division may very well be World Boxing Council bantamweight champion Hozumi Hasegawa (27-2, 11 KO’s), who made short work of his number #4 rated WBC challenger Nestor Rocha (21-2, 17 KO’s), stopping him in the 1st round on Tuesday night at the World Memorial Hall, in Kobe, Hyoga, Japan.

Hasegawa, 28, dropped Rocha twice in the first round before Gary Ritter stepped in and halted the bout at 2:28 after asking Rocha to walk towards him. Rocha appeared stagger slightly as he was walking, which caused Ritter to waive off the fight. The bout started slowly with Hasegawa jabbing and looking for openings in Rocha’s defense.

At one point, Hasegawa, a southpaw, nailed Rocha with a big right hook that reminded me a lot of IBF flyweight champion Nonito Donaire, who likes to throw a lot of right hooks. However, Hasegawa, who outweighs Donaire by six pounds and fights two divisions above him at bantamweight, looked much more powerful than Donaire and I had a feeling that Rocha wouldn’t last long if he got hit with one of the hooks.

Sure enough, a short while later Hasegawa tagged Rocha, 28, with a straight left followed by a sweeping right hook that flattened Rocha on the spot. Rocha quickly got to his feet and the action resumed. Hasegawa then backed Rocha up to the ropes and nailed him with a four punch combination sending him down for the second time in the round.

This time after Rocha got to his feet, referee Gary Ritter asked him to walk to him and Rocha complied, but staggered just as he was nearing him. The fight was then waived off at that point.

Hasegawa has improved a lot in the past four fights since adding a right hook to his arsenal. Before, Hasegawa didn’t throw right hooks and was more of a flurry and combination puncher. However, after learning how to throw a right hook, Hasegawa has knocked out his last four opponents, stopping two of them in a 2nd round TKO and the last two in 1st round knockouts. In looking at other top bantamweights like Agbeko, Anselmo Moreno and Fernando Montiel, I wouldn’t give any of them a chance against Hasegawa and see all of them getting stopped. He’s that much better than those guys.

Stevens too Much for Wilczewski

On the undercard of the Tomasz Adamek vs. Bobby Gunn fight on Saturday night, super middleweight contender Curtis Stevens (21-2, 15 KO’s) destroyed Piotr Wilczewski (22-1, 7 KO’s) in a 3rd round stoppage in a scheduled eight round bout at the Prudential Center, in Newark, New Jersey.

Stevens, 24, ranked #15 in the World Boxing Organization (WBO) super middleweight division, dropped the previously undefeated Wilczewski in the opening round with a left-right combination. In the 3rd round, after knocking Wilczewski to the canvas early in the round, Stevens caught Wilczewski, 30, on the ropes and unloaded on him with over 30 consecutive punches to the body and head before referee Earl Morton stepped in and halted the bout at 1:46 of the 3rd.

Stevens was previously defeated by Andre Dirrell by a 10-round unanimous decision two years ago in June 2007. However, Wilczewski was much less capable compared to Dirrell and found himself a target for Steven’s big shots in the first round.

Before knocking Wilczewski down, Stevens hurt him with a big left hook and was teeing off on him for much of the round until catching him along the ropes and knocking him down. Wilczewski fought well in the 2nd round, landing a right hand at the start of the round that caught the huge Polish crowd shouting encouragement for him.

Wilczewski fought well for the remainder of the round, moving and landing a lot of jabs, right hands and short left hooks. Stevens stalked him around the ring throwing huge shots but missing with most of them. The way that Stevens was swinging, it looked as if he was trying to take Wilczewski’s head off.

However, in the 3rd round, Stevens caught up to Wilczewski and hurt him with a left hook early in the round, knocking him to the canvas. Wilczewski got up off the canvas looking embarrassed. Stevens then tore into him landing an avalanche of punches as Wilczewski unsuccessfully attempted to duck the shots while resting with his back against the ropes.

The referee perhaps let the fight go 15-20 seconds longer than he should have, because Wilczewski got hit with an enormous amount of shots before the referee stepped in and halted the bout.