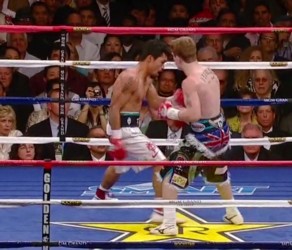 By Giancarlo Malinconico: If you review the careers of Floyd Mayweather and Manny Pacquiao, you will notice many championships in many different weight classes. Pacquiao started his career at 106 pounds and moved as far up as welterweight, defeating the “Golden Boy” Oscar De La Hoya. Mayweather started at 131 pounds and eventually went as high as 154 pounds, also defeating De La Hoya. Both fighters fought many good and great boxers at almost every division they ascended through respectively throughout their careers.

Mayweather, however, did not face the best in the Welterweight division and faced (at the time) the best 140 pound fighter in Hatton, but made him come up to welterweight to make the fight happen. Pacquiao may have skipped over some of the better fighters in the lower divisions, including lightweight, but he holds a win against Juan Manuel Marquez who is currently the top rated lightweight. What sets Pacquiao apart from Mayweather is that Pacman is attempting to fight the best fighters in the higher divisions. I don’t feel Pamcan should be criticized for skipping over the top lightweight fighters since he moved up to battle the best fighter in the division above lightweight in facing Hatton. Furthermore, Pacquiao is challenging Miguel Cotto. Although he is not the Ring Magazine Welterweight Champion, Cotto is clearly the first or second best welterweight in the world. And if you believe “Sugar” Shane Mosley is the number one welterweight on the planet, he has a loss on his record to Cotto. Besides, Cotto’s loss to Margarito (by using inductive reasoning) is tainted, for it is hard to believe Margarito would just begin loading his gloves against Mosley after he just beat Cotto who beat Mosley.

The reason that the Pacman’s career will surpass Mayweather’s if he is successful against Cotto is– he would have defeated two of the best fighters in their respective weight classes (Hatton at 140 and Cotto at 147 pounds). Cotto, moreover, would be a bigger win than anyone Floyd has on his record. Cotto has a win over the great Shane Mosley apart from beating solid opponents throughout his career. Mayweather’s biggest wins are against Diego Corrales at 130 pounds, Jose Luis Castillo at 135 pounds, Arturo Gatti (the recently deceased blood and guts warrior) at 140 pounds, Ricky Hatton at a 147 pounds and De La Hoya at 154. Pacman has wins over Hall of Famers– Barrera, Morales and JM Marquez between 126 and 130 pounds. And he has a win over the former-140 pound kingpin, Hatton.

Many will say Pacquiao has been beaten before, and has looked less than spectacular in past performances. Therefore, how can you place him ahead of an undefeated, multi-division champion like Mayweather? Here are a few of my responses to the question. First, being undefeated does not equate to greatness (see: Sven Ottke). I understand Mayweather has fought much better opposition than say, an Ottke, but being undefeated cannot be the end of the discussion. Secondly, I believe (like many pundits) that Jose Luis Castillo clearly beat Mayweather in their first encounter. I understand Mayweather hurt his hand, complained of an arm injury and sickness, but he lost the fight. Pacman has a few losses throughout his career, one to Morales, and he looked bad against Nedal Hussein, a journeyman. But he got off the canvas to beat Hussein and avenged his loss to Morales with two knockouts, which was far more impressive than what Mayweather did in the Castillo rematch. Thirdly, Pacman, including the Cotto fight, will have faced the better opposition at the higher weights. As I mentioned Cotto will be the best opponent either man faced, unless you want to count a De La Hoya who I believe was passed his prime in both fights. Besides, Cotto beat Mosley who beat De La Hoya. In addition, Pacman destroyed Hatton and De La Hoya more convincingly than Mayweather, who actually only got a split-decision against De La Hoya and lost rounds against Hatton. The bottom line, although both fighters climbed through the higher weight divisions to win championships, Pacman challenges a top (if not the top) boxer at welterweight in Cotto, while Mayweather fought Carlos Baldomir.

Although Marquez is no pushover, Mayweather is yet to challenge a top, legitimate welterweight. And I am now hearing Mayweather is asking for more than a 50/50 split against Pacman if a match is to emerge between the two next year. It is probably another excuse for Mayweather to duck the dangerous fight with Pacman in favor of facing a lesser fighter, whom he can push around in the negotiations over the purse split and other match arraignments.