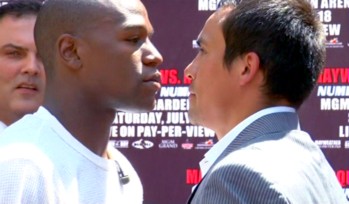 By Liam Brindle: Much has been said of late about Floyd Mayweather, Jr. (39-0, 25 KO’s) and a potential bout with current pound-for-pound king Manny Pacquiao (49-3-2, 37 KO’s) with many questions being asked of Mayweather. Why has he taken a fight with a much smaller man? Why didn’t he take a fight with ‘Sugar’ Shane Mosley or Miguel Cotto? Does he fear these two fighters? Do they hit harder than anyone he has ever squared off against?

In my opinion taking the fight with Juan Manuel Marquez (50-4, 37 KO’s) was a stroke of absolute genius.

Seven months earlier Mayweather won via split decision, a SD that divided opinion around the globe and is still the topic of conversation on a daily basis.

Manny then went onto take on the same 2 opponents and dealt with them both in a much more convincing and brutal manor (especially Ricky).

I do believe that Manny did do an awesome job both but Mayweather questions Manny’s Oscar win due to Oscar undoubtedly looking extremely drained to make the weight and Mayweather takes credit for Manny blowing Hatton away claiming ‘I took it all out of him…he was a shot fighter after I defeated him’.

So I feel that Mayweather has taken this fight because Juan Manuel Marquez gave Manny Pacquiao 2 unbelievably tough fights both of which divided opinion throughout the boxing world. Both of which Mayweather believes Marquez won.

By taking on Marquez, Mayweather feels that if he does a comprehensive job or scores a KO he will gain a massive chunk of the psychological edge that Manny has gained by beating Oscar and Hatton back.

I also feel that all the question marks around Mayweather at the moment: ring rust, money, will all be blown away within the first 60 seconds when we all realize how fast, accurate, strong, illusive and most of all how smart Floyd Mayweather, Jr. still is. My prediction a late stoppage in favour of Mayweather after a very spirits Marquez performance.

« Amir Khan – There Will be Nowhere to Hide