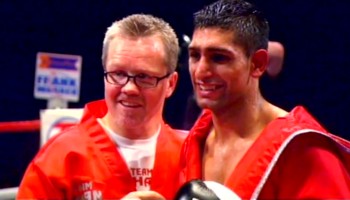 By Scott Gilfoid: For what it’s worth, Freddie Roach, the trainer of Amir Khan (20-1, 15 KO’s), is predicting that the 22-year-old Khan will be stopping World Boxing Association light welterweight champion Andriy Kotelnik (31-2-1, 13 KO’s) this Saturday night at the M.E.N. Arena, in Manchester, England.

Roach has been proclaimed a genius by some in the boxing world and seen as a Nostradamus of sorts due to his last two accurate predictions about Manny Pacquiao defeating Oscar De La Hoya and Ricky Hatton.

However, with a fighter as talented as Pacquiao, it’s not hard to be accurate with predictions, especially when the opponents are the over-the-hill De La Hoya and a fighter like Hatton who seemed to throw out his entire pre-fight game strategy when he entered the ring with Pacquiao and foolishly tried to slug it out with the Filipino star. With Khan, however, predicting knockout victories isn’t quite so simple.

Part of the problem is that Khan has never knocked out an A class fighter in his four year pro career. For that matter, he really hasn’t beaten a top notch fighter either during that time. Oh sure, Marco Antonio Barrera was ranked in the top 10 in the lightweight division at the time that Khan fought him, but I suspect that Barrera would have been hard pressed to beat any of the other fighters in the top 10.

After all, at the time that Khan fought Barrera, the Mexican fighter had lost two out of his last four fights with his only wins coming against C class opponents in the lightweight division, beating Sammy Ventura (25-19) – and looking horrible in doing so – and a fighter by the name of Freudis Rojas (1-7-1).

Khan’s fight with Barrera wasn’t really much of a victory, because the bout was stopped in the 5th because of a cut that Barrera had sustained early in the fight. The only true top tier fighter that Khan has faced up until this point, Breidis Prescott, quickly knocked Khan out in the 1st round. For this reason, I find it amusing and not easy to buy Roach’s prediction of a knockout victory for Khan.

I’d be pleased if he can somehow squeak out a decision over Kotelnik, because that would be a major accomplishment for Khan the way I see it. Given how softly Khan has been matched up since turning pro in 2005, beating a fighter like Kotelnik, who is leagues better than the easy opponents that have been served up to Khan thus far, would be a huge accomplishment for Khan.

I do disagree with Roach’s perception about Kotelnik being the easiest of the champions to fight, because I would pick him any day over IBF light welterweight title holder Juan Urango, who I see as a limited slugger. It worries me if Roach thinks that Urango could beat Kotelnik, because that would be showing some lack of knowledge about the fighters in my view.

But then again, if Roach honestly feels that Khan can not only beat Kotelnik, but stop him as well, Roach might be a little too drunk his recent success with Pacquiao. Unfortunately, having one good fighter in the stable doesn’t mean that all the rest will be just as good or even close, even if Khan does spar on rare occasions with Pacquiao.

Roach feels that Khan can beat Kotelnik by using movement and by going after his body with hooks. That sounds like an excellent strategy, except for the body punching. For a fighter with a fragile chin like Khan to get away with throwing body shots, he’s going to have to risk getting hit a lot, because body punchers generally take a lot of shots when they come in to throw their punches.

That might not be a wise move for Roach to take with Khan, who has had trouble getting dropped by lower level fighters since turning pro. Roach feels that Khan will be able to outwork Kotelnik by throwing lots of fast shots, and that Amir will be able to overwhelm him with punches.

That’s possible, but it’s also possible that Khan will take a lot of punishment and might get stopped while throwing all those punches. Again, Khan has never beaten an A class fighter in his career and has mostly beaten British fighters with average to low talent.

Roach sees a victory over Kotelnik as putting Khan into the top rungs of the boxing world, meaning in theory that Khan would then be in the running for fights against the biggest stars in the light welterweight and welterweight division.

Since the light welterweight division has no real stars, it would mean that Roach would be looking to put Khan in with one of the top welterweights like Miguel Cotto, Floyd Mayweather Jr. and Shane Mosley. If that were to happen, I see any one of those fights (there would be only one chance) as being a hopeless mismatch for Khan, with him getting knocked out in the 1st or 2nd round.

Regardless of whatever catch weight that would be involved in the fight, Khan wouldn’t make it very far in the fight even if he ran the whole time. It would in effect be his only shot, because after getting knocked out quickly, Khan would be thrown back to the light welterweight division where he’d have to contend with fighters like Marcos Maidana, who I feel would destroy Khan just as easy as Prescott would. I kind of see Khan as another Julio Cesar Chavez Jr. type fighter, one that is steered around looking for beatable fighters and one big jackpot fight.