Amir Khan – There Will be Nowhere to Hide 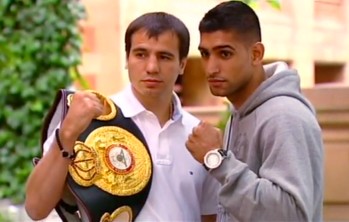 By Bal Kang: This coming weekend on Saturday 18th July is fight night; we will see Amir Khan challenge Andreas Kotelnik for the WBA Light Welterweight Championship at the MEN Arena Manchester, England. For many there still remains a lot of unanswered questions regarding Khan’s position within the Boxing scheme of things.

Before Khan’s bout with Prescott, there was criticism that he wasn’t taking on some of the stiffer challenges closer to home such as the British champion. After that brutal 1st round KO at the hands of Prescott, Khan’s career seemed to be heading the same way, straight to the floor.

Major repair work was the order of the day and Freddie Roach was the person chosen to oversee this delicate job. We the fight fans were being told the loss to Prescott was due to various errors, the way Khan just went straight in, lack of controlled patience, even the trainer was at fault.

To demonstrate this was a ‘one off’ and that it would never happen again, Khan then defeated a game but never in contention Osin Fagan, who I understand may have been on crutches not long before the fight, yes, repair work indeed.

The next spectacle was when modern day legend Marco Antonio Barrera was called upon to fight in the UK against Khan, true boxing fans knew what the score was here, but remember, repair job was the order of the day.

I personally thought the Barrera fight should have been stopped at the end of round 2, as the cut on Barrera’s forehead was extremely bad and clearly hampered the Mexican, but it just so happened the fight was stopped at a time when it could go to the scorecards and Khan was declared the winner. Khan raised his arms into the air with his chest pumped out to suggest that he had done it, he had beaten the modern day great Barrera and therefore repair job complete,

Was it though? Even Khan only needed to look into the mirror of truth and he would know, just as we do, that Barrera win was not the purist of wins, enough said!

In a matter of days, Kahn will have an opportunity to fulfil one of his childhood dreams of becoming a World Champion. Kotelnik in many circles of Boxing is considered the lesser of some of the champions, when this fight was first announced, I know of many who thought this is the easiest route of getting a belt.

But this may not be so clear cut, Khan should go onto win this fight because there are many factors to support his cause, the fights in England, he has a world class trainer in his corner in Freddie Roach, Kotelnik on paper at least, doesn’t have the tools to do the job, he’s not a big puncher with only 13 KO’s from his 34 contests and he’s a fairly defensive sort of fighter which allows Khan to get his shots off and hit Kotelnik with periodic flurries and there is a reasonable height difference too.

So on this piece of paper Khan has a very good opportunity of becoming champion, so why do I keep referring back to a controversial ‘home cooked’ decision win for Kotelnik over Maidana? (Just for the record I thought Maidana deserved the win). Maybe it’s because of what Maidana just did recently to Victor Ortiz. Despite the controversy Kotelnik did go the distance against a hard puncher in Maidana and towards the end of the fight; he showed that he was still in the contest.

My initial concerns for Khan are that he’s only ever been the full 12 rounds on one occasion, against Gary St Clair in which he won a unanimous decision, Khan’s also fighting a step up in weight, these are very basic factors but may well be crucial.

Worst case scenario, the way I see it would be for Khan to start very well and demonstrate good hand speed and shot selection, I can also see Khan catching the judges eye’s with intermittent flurries as Kotelnik defends with a high guard. Freddie Roach may well then advise Khan to work the body in order to bring that guard down, so he can go back upstairs.

You are probably thinking, if that’s the worst case scenario what’s the best, well I’ve not finished yet.

Rounds 8 or 9 may prove to be the turning point, if Khan shows signs of fatigue and begins to slow down, Kotelnik may have a chance to turn the tide and drag Khan into deep waters, where some of those unanswered questions will re-surface.

The best case scenario is that Khan just performs a complete shut out by picking off Kotelnik with single shots followed by those periodic flurries and wins a unanimous decision.

One thing is for sure, this fight will provide a real measure of where Khan sits in the Boxing scheme of things. If Khan does win, and there is no controversy, then he will get the credit he deserves, certainly from me, but those unanswered questions will still need to be addressed.

Khan to me has a huge heart, he’s a young kid who I believe genuinely wants to fight the best and my awareness tells me that he has not ducked anyone put forward to him. He has repeatedly said he wants to avenge his sole loss against Prescott, and that is the right attitude, so that’s fine.

However, will this attitude remain if or when he has that WBA belt around his waist, it’s a big belt, but not big enough to hide behind.

The time for playing hide and seek now stops, should Khan win on Saturday, from that moment onwards there is no place to hide, Kotelnik might not be considered one of the more accomplished champions of today, but he will or certainly should provide a true measure of a test for Khan.

The Light Welterweight division is a hot one right now, Timothy Bradley, the evergreen Nate Campbell, Marcos Maidana, Ricardo Torres, Kendall Holt, Juan Urango other potential foe’s include Victor Ortiz, maybe Junior Witter but then if he’s going to fight someone from the UK then surely Hatton will be looking for a belt.

Now, putting Hatton and Witter to one side, if none of the other bouts are made, I can’t help but feel the ‘con is still on’!

If Khan wants the recognition and credit of a true champion, he must earn it and he can begin that process this Saturday.

Freddie Roach has had an opportunity to work with Khan for a considerable period of time now, so we should see some polish to Khan’s work. If this is enough to win this Saturday, we will soon find out.

But will Khan still want to face Prescott’s bombs at Light Welterweight?

Let’s now raise the intrigue level up a few notches.