Boxing – Super Six to the Rescue 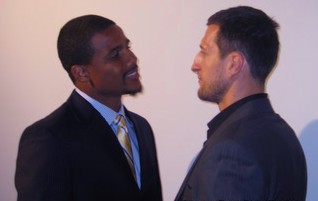 By Gavin bridges: Less than a month ago, rumour began circulating of a Tournament, pulling in six of the premier performers within a certain weight. Immediately, a knee-jerk reaction from myself, any many of my co-contributor.

I wanted my voice to be prominent; to pour my own scorn over the circus Showtime were throwing at us; to ridicule a poorly planned, foolishly conceived headline-spinning opera; to belittle them for trying to shake the status qou.

Only when I sat back and thought about the latter statement did it turn round and bite me on the ass, that rather than belittling our beloved sport, this one move alone could be it’s very saviour.

Already I hear certain levels of derision abound, but please hear me out. We talk so often about the rise and rise of UFC on these pages , (a personal bugbear of mine) how they match up the best against the best, well here in this one event we have exactly that, 6 of the very best fighters in one division, pugilist against pugilist, boxer against fighter, brains versus brawn. We all have our favourites, we all have those we long to see exposed, and for the next two years we will have that, even fights of intrigue, drama and real genuine meaning. So to messrs. Kessler, Froch, Abraham, Dirrel, Ward, and Taylor, I both thank and salute you.

Then this got me thinking – why just the Super-Middles? We so often argue on these pages about who should go in with who, why Pacquiao avoids …….(fill in as to your opinion!!) and never do we get the chance to see these bouts. I’ll give you a couple of examples; Say we had a heavyweight Super Six. Haye, Arreolla, Chambers, Povetkin and the Klitschkos. I’d even throw in the premise that the brothers Grim could avoid each other until they reached the final, just imagine that? Or how about Welterweights? Mosley vs Berto, Amir Khan matched with Timothy Bradley, and, of course, the small matter of Mayweather – Pacquiao….

Suddenly this all starts to make sense. Fighters working their damnedest to get into the mix for when the Super Six are announced for their weight class, putting their records on the line to get to the holy grail of this mega-money opportunity, the chance of international super stardom, to be at the pinnacle of Boxing legend and folklore.

We all deride the alphabet system of titles, how this ‘guy’ can be number 2 in the WBA, but that ‘guy’ is only number 10? In the Super Sixes, surely the winner would get linear recognition of being the best of the best, the one true warrior who was prepared to do whatever it takes to be the ‘Man’. More thoughts came to me. Surely ‘Ring Magazine’ could run alongside each tournament, bestowing the winner their belt, and finally we would see someone winning that coveted title of magazine champion and being given that world-acclaimed honour of being ‘Ring’s own champion. In essence, a World Cup of Boxing.

And my mood changed. No longer scorn, just, well, excitement. Huge excitement at the thought of Kessler vs Ward, Froch Taylor II, Abraham and Dirrel getting it on. And to myself I quietly murmured ‘Thanks Guys, I think you just saved Boxing…’

Pacquiao Opens as 2-to-1 Betting Favorite against Cotto, Is It Justified? »