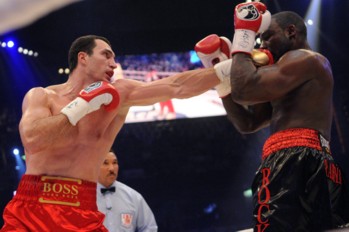 By Erik Schmidt: Tickets are moving fast for the June 20th bout between David Haye and IBF/WBO heavyweight champion Wladimir Klitschko, with an incredible thirty thousand tickets being sold on the first day along, says Bernd Bonte the head Manager for the Klitschko brothers. The German boxing fans stood in lines that Bonte says were close to a mile long, possibly exaggerating more than a little to help promote the fight a little.

The fight, however, doesn’t need much promoting because it’s selling well without Bonte’s assistance due to the good matchup between the knockout artist Haye, 28, a former cruiserweight champion, and Wladimir, who is considered to be the best heavyweight in the division.

The bout will be taking place at the Veltins Arena, in Gelsenkirchen, Germany on the 20th of June. The stadium is massive, with a seating capacity of 60,000. Due to the high ticket response on the first day of sales, Bonte is estimating that the remainder of the tickets should be sold out very soon for the fight.

Wladimir, 33, has made six defenses of his International Boxing Federation title since winning it with a 7th round stoppage over Chris Byrd in April 2006. None of Wladimir’s opponents since that date have come close to giving him a competitive fight, which makes boxing fans wonder how the inexperienced Haye will be able to do any better against Wladimir. Although Haye has a lot of prior experience at cruiserweight, he’s only fought twice at heavyweight against less than stellar opposition.

Perhaps for this reason, many people are thinking that Haye will be in over his head in this fight and will be quickly knocked out. Haye’s best wins in his career are arguably his knockout victories over Enzo Maccarinelli and Jean Marc Mormeck, both much smaller than Wladimir and perhaps not good enough to last more than a round or two against the big Ukrainian.

One can only imagine how Wladimir would toy with the 5’11” Mormeck, pounding him with jabs, left hooks and right hands from a distance without getting hit. Yet, Mormeck was able to put Haye down in the 4th round of their November 2007 fight. Haye would later come back to get the stoppage win, but the knockdown showed Haye’s major weakness – his chin.

Manfredo Too Much For Smichet

The talented but flawed super middleweight Peter Manfredo Jr. (32-6, 17 KOs) stopped Canadian based knockout artist Walid Smichet (20-6-3, 14 KOs) in the 7th round on Friday night at the Montreal Casino, in Montreal, Canada. Smichet and Manfredo traded huge shots in the first two rounds with Smichet getting the better of the action. However, after the 2nd round, Smichet faded badly and was dropped by Manfredo in the 3rd round.

Smichet rallied a little in the 4th round but was unable to fight hard for the entire round and was outworked by Manfredo. In the 6th, Manfredo hurt Smichet with a big right hand to the head. It was only matter of time after that, and in the next round, Manfredo finished Smichet off with a left hook to the head at the end of the round. The bout was stopped by referee Marlon Wright at 3:00 of the 7th.

For Manfredo, 28, it was a much needed win as he’s dropped from the top 15 in the past year after suffering losses to Jeff Lacy and a 3rd round stoppage to Sakio Bika. However, with the all the new talent in the super middleweight division, like Andre Dirrell and Andre Ward, it’s questionable just how far a fighter like Manfredo can go.

Manfredo might want to look at the possibility of either moving down to middleweight or moving to the light heavyweight division. Due to his tendency to be knocked out from time to time, Manfredo might do better at middleweight rather than against bigger punchers like Chad Dawson.