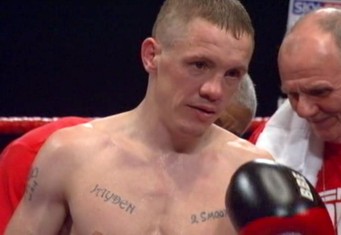 By Nate Anderson: Jason Booth (32-5, 13 KOs) added the vacant BBBofC British super bantamweight title to go along with his Commonwealth (British Empire) bantamweight by defeating Mark Moran (11-1-1, 3 KOs) by a 6th round stoppage on Friday night at the Indoor Sports Centre, Leigh, in Lancashire.

The bout was stopped by referee Howard John Foster at 1:55 of the 6th after a huge cut opened up on the left eyebrow of Moran. At the time of the stoppage, Moran was getting pummeled on the ropes by Booth and literally was having showers of punches rained down on him by the 31-year-old Booth.

Due to the severity of the cut, there was no doubt that the fight had to be stopped as the cut was both deep and long and it was bleeding badly at the time that Foster put a stop to the bout immediately after the cut occurred.

The bout was close in the first two rounds as Moran matched Booth punch for punch at close range. Booth still seemed to have a slight edge at that time landing the cleaner shots. However, after the 2nd round, Booth’s enormous work rate was way too much for Moran to keep up with and Mark soon found himself getting hit almost nonstop in rounds in rounds three through six.

By the 5th round, Moran was throwing less punches back and looking tired from the incredible pace that Booth had set in the fight.

Booth stayed on top of Moran in the 2nd round, making him work much harder than he wanted to and countering every one of his shot punches. There were few clinches in the round and on the one or two occasions that they did clinch, they broke themselves without needing help from the referee. Neither fighter showed any power to speak of, but it looked as if Booth was throwing the harder shots.

Moran stalked Booth around the ring in the 3rd, but was unable to match Booth’s enormous work rate when the two would start throwing shots. Indeed, there were few exchanges in which Moran got the better of Booth in the round. Booth just kept throwing a steady diet of hooks and hard body shots, and making sure to counter Moran each time he would get a shot in of his own.

Moran landed two nice body shots at the start of the 4th, and it looked for a second that he was going to have a good round. However, Booth quickly shut him down by unleashing mini four punch flurries. The punches didn’t have much power but they were getting through Moran’s guard and landing well to the head and body. By the end of the round, Moran was no longer fighting competitively with Booth and just taking one long sustained beating.

The fifth round and 6th rounds were all Booth, as Moran just looked tired and out of his element in the fight. Booth never slowed down for an instant with his punches and just kept pouring them in and overwhelming Moran’s defense. In the 6th, Booth was just beating Moran nonstop against the ropes when Moran was suddenly cut over the left eye.

Referee Howard John Foster immediately stopped the action and after taking a good look at the cut, he chose to stop the fight. As it turns out, Foster did Moran a big favor because if the fight had continued much longer, Moran would have likely been beaten into the canvas by Booth.

“I put it down to experience,” Booth said after the fight. “He fought the wrong fight. It gave me loads of time. I was getting my shots off and didn’t like some of the tactics. The head clash was an accident. It wasn’t intentional.”