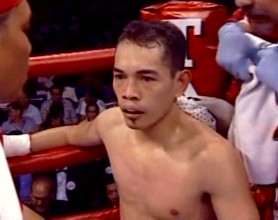 Viloria, 28, with the huge Filipino audience giving him a lot of encouragement, knocked Solis down with a huge right hand to the head in the 11th.

The bout was then stopped by referee Bruce McTavish at 2:56 of the round. Both fighter traded big shots from the beginning, but Viloria was able to land the harder shots and ended up quickly cutting Solis up over both eyes.

Even worse for Solis was that he lost points in the 3rd and 5th for landing low blows. Solis had his moments as well in the fight, hurting Viloria with a right hand in the 8th. However, he was unable to finish him off. However, it was Viloria who controlled most of the fight with his harder shots.

After knocking Solis out in the 11th, Ulises would stay down for a considerable amount of time trying to recover. Earlier in the 11th, Solis had been hurt by two huge shots to the head. Solis was still not quite right when he was leveled by a tremendous right hand from Viloria that dropped him to the canvas.

The win was a huge upset, as Viloria, ranked only at number #9 in the IBF, hadn’t fought any top fighters in two years since losing to Edgar Sosa in April 2007. During the last two years, Viloria looked slow and lethargic in the ring, hardly the type of fighter that could pull off an upset like this.

Viloria had held the WBC light flyweight title for a short period of time between 2005 and 2006, eventually losing it to Omar Nino Romero in 2006.

In other action on the card, IBF flyweight champion Nonito Donaire (21-1, 14 KOs) easily defended his title by stopping previously unbeaten challenger Raul Martinez (24-1, 14 KOs) in the 4th round of a hopelessly one-sided bout. Donaire, 26, led all the way, knocking Martinez down four times in the fight before the bout was finally stopped in the 4th by referee Pete Podgorski at 2:42 of the round following yet another knockdown by Donaire. Martinez was down twice in the 1st, another time in the 2nd and a final time in the 4th to end the slaughter.

Could Froch Abandon England For the United States? »