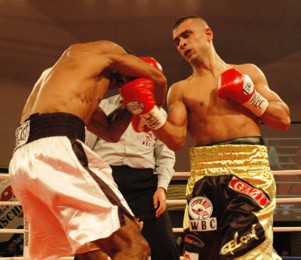 Graciano Rocchigiani’s first show as trainer for ARENA Box-Promotion was a complete success. “Mini-Tyson” Selcuk Aydin and “Dancing Destroyer” Herbie Hide scored wins in front of a sold-out crowd in Cuxhaven (Germany) Friday night. WBC international welterweight champion Selcuk Aydin defended his title by an impressive first round annihilation of experienced contender Luis Hernandez from Ecuador. Hernandez who prepared for the fight at Miguel Cotto’s training camp in Puerto Rico began strong while Aydin waited for his chance. When he saw an opening ARENA’s “Mini-Tyson” chopped down “Morochito” Hernandez with some vicious hooks.

Referee Guido Cavalleri stopped the fight after the second knockdown. Time was 2:32 minutes.

“This was a very dominant performance by Selcuk”, stated promoter Ahmet Öner. “He showed that he is a real powerpuncher and ready for the next step. I think he will be ready to challenge WBC champion Andre Berto very soon.”

“I am very proud to hold the WBC international champion title”, added Aydin. “And I would simply love to ‘upgrade’ it to the world famous Big Green Belt and follow the tradition of great WBC champions. Also, I want to thank my promoter Ahmet Öner for putting me into the hands of Graciano Rocchigiani. He has been a great champion and he is a perfect coach for me.”

Former two-time world heavyweight champion Herbie Hide scored a one-sided unanimous decision win over Sandro Siproshvili from Georgia. “The Dancing Destroyer” is scheduled to fight Matt Godfrey in a WBC Final Elimination bout next. The fight will most probably take place in May in Saarbrücken (Germany).

“I did what I had to do”, said Hide. “Rocky told me to stay focused and fight with discipline. It was also good to fight some rounds before the Eliminator comes up. I am ready for Godfrey. He won’t stop me – I will be champion of the world again!”

“I am very happy with the performance of the boys”, said coach Rocchigiani. “I think Herbie hasn’t been hit once and Selcuk just showed great determination, power and timing. I am sure that both of them will be world champions soon.”

The heavyweight clash between rising German star Steffen Kretschmann and Russia’s Denis Bakhtov had to be postponed due to an inner ear injury Kretschmann suffered in the last days of sparring.