Guerrero vs. Yordan, Julio vs. Kirkland On March 7th 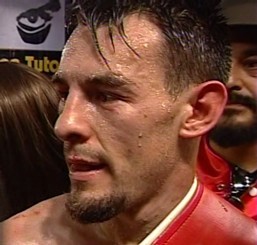 By Dave Lahr: Two-time International Boxing Federation featherweight champion Robert Guerrero (23-1-1, 16 KOs) will face unbeaten Indonesian Daud Cino Yordan (23-0, 17 KOs) in a 10-round bout at The Tank, in San Jose, California. Guerrero, 25, is coming off an impressive 1st round TKO over Edel Ruiz On January 24th on the undercard of the WBA welterweight showdown between then champion Antonio Margarito and Shane Mosley.

Guerrero came across the ring in the first seconds of his bout with Ruiz, and planted a hard left into the stomach of Ruiz, knocking him down on the canvas.

Ruiz was badly hurt from the body shot and unable to right himself and get up off the canvas. The knockout was especially impressive because it was Guerrero’s first bout as a super featherweight and he showed that his tremendous body shots are just as dangerous as super featherweight as it had been in the lower weight class.

Guerrero, ranked number #5 in the IBF and #5 in the WBC super featherweight division, has a tough opponent in Yordan, who at 21, has both excellent speed and power. However, what Yordan has going against him is that he’s built up his unbeaten record on mostly lower level opponents in Indonesia.

In the one time that he strayed from the narrow confines in his home in Indonesia, he struggled to beat Antonio Meza (24-5-1, 16 KOs) by an eight-round majority decision in September 2008. Guerrero will have an advantage, besides his bigger power, in that he’ll be fighting in front of a home audience in San Jose, because Gilroy, Guerrero’s home town, is located right next door to San Jose.

In other exciting action on the card, undefeated light middleweight contender James Kirkland (24-0, 21 KOs) will be facing the powerful Colombian Joel Julio (34-2, 31 KOs) in 10-round bout. Julio, 24, is coming off a 12-round title loss to WBO light middleweight champion Sergiy Dzinziruk in November. Julio, noted for his heavy hands, was never able to turn the fight into a brawl the way he wanted to as Dzinziruk boxed him from the outside for the full 12 rounds, moving often and giving Julio few chances to land his huge shots.

Though Julio was able to land some huge punches every now and then in the fight, he was mostly foiled by Dzinziruk powerful jab, which he kept in Julio’s face all night long. Julio’s loss was similar to his 12-round unanimous decision loss to Carlos Quintana in June 2006. Quintana used a similar jabbing and moving attack to defeat Julio, keeping him from landing his big power shots by moving all night long.

Kirkland, 24, is coming off an exciting 8th round TKO over Brian Vera in November, a fight in which both of them went to war for eight rounds exchanging huge power shots. Kirkland and Vera went right at each from the first round until Kirkland stopped him in the 8th with a barrage of punches.

Kirkland would seem to be the perfect opponent for Julio, who does well when he has someone standing directly in front of him and trying to trade power shots the way that Kirkland will likely be doing. Then again, Julio has never met a fighter as powerful and as aggressive as Kirkland, so unless his chin holds up to the pounding that he’ll be taking from him, I see Julio having a lot of problems with Kirkland and probably getting knocked out.

Ortiz, 22, is considered one of the best new contenders in the light welterweight division despite previously suffering a loss to Corey Alarcon and a draw to Marvin Cardova. However, Ortiz is steadily improving and in a division that lacks a lot of quality fighters, Ortiz may be someone that can pick up a belt in the future. Ranked #4 in the WBO, #5 in the WBA and #10 in the WBA, he’s not far from getting a title shot.

Arnaoutis, 29, a finesse fighter with excellent boxing skills, has been beaten twice previously, losing to Ricardo Torres and Kendall Holt. He fought them very tough, however. Since losing a lopsided 12-round decision to Holt in April 2007, Arnaoutis has fought four soft opponents, trying to work his way up the ranks.

Based on his power, I suspect that Ortiz should win this fight without too many problems. However, as good as he is, he’s looked bad against Emmanuel Clottey and Dairo Esalas, making it hard to predict which side of Ortiz you’ll see. When he’s good, he’s really good, but when he’s off, he looks amateurish and very beatable.