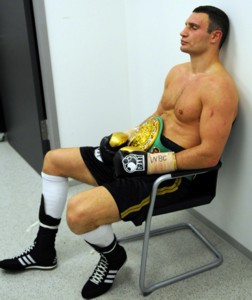 World Boxing Council President Jose Sulaiman announced today that WBC heavyweight world champion Vitali Klitschko of Ukraine and official challenger Juan Carlos Gomez of Cuba/Germany have reached an agreement and signed for their mandatory fight. The purse offer, which was scheduled for tomorrow, has been cancelled.

They also said that the fight will be held in Germany during the first two weeks of March, 2009. It will be Klitschko’s first defense of the title that he won last October with a ninth-round TKO against defending champion Samuel Peter of Nigeria.

Klitschko has a record of 36-2 with 35 knockouts. His knockout percentage of 97.2 is the highest for a heavyweight world champion in the history of professional boxing.

Gomez has a record of 44-1 with 35 knockouts. A former WBC cruiserweight world champion, he won the title in February, 1998, and made 10 successful defenses before vacating the title to move up in weight. He became the mandatory heavyweight challenger with two wins, both by unanimous decision, in elimination bouts – the first against Oliver McCall and the second against Vladimir Virchis.

Promoters Arthur Pelullo/Banner Promotions, Rodney Berman/Golden Gloves, Bernard Roos/R2Image & Events and Pascal Cordier/Sport Evenements will present a sensational world championship fight card on February 14, 2009, at the Palais des Sports in Saint Quentin, France. The main event and co-featured bout will be televised in France on Canal+ Network (8:45 P.M. to 10:45 P.M. local time), as well as other networks around the world.

In the main event scheduled for 12 rounds, International Boxing Federation featherweight world champion Cristobal Cruz, 37-11-1 with 23 knockouts, of Tijuana, Mexico, will make his first defense of the title against Cyril Thomas, 33-2-4 with 10 knockouts, of Saint Quentin.

The 31 year-old Cruz won the vacant title with a 12-round split decision victory in a fast-paced, exciting fight against Orlando Salido on October 23, 2008. Salido, ranked No. 2 by the IBF, was the clear favorite to win and built an early lead – after six rounds, he led by scores of 58-56, 58-56, 57-57. But Cruz, determined and hard-working, rallied in the second half of the fight – he won the seventh, eighth, ninth, and tenth rounds on two scorecards, then swept the eleventh and twelfth rounds on all three and won by scores of 116-112, 116-112 Cruz, 115-113 Salido. After the fight, Fightwriter.com’s Graham Houston reported: “Tough, gritty and tenacious…. This was an outstanding performance by Cruz – his second in a row – and he certainly fought a terrific fight.”

Thomas, 32 years old and an 11-year professional veteran, is the IBF’s No. 12-ranked featherweight contender and won an IBF title eliminator in his most recent fight in November, 2008. He currently holds the IBF International featherweight title and is a former European featherweight champion, as well.

Five more exciting fights are planned to complete the card, including:

Phillip Ndou, 31-1 with 30 knockouts, of Johannesburg, South Africa, will be featured in an eight-round jr. welterweight bout against an opponent to be announced. A member of the 1996 South African Olympic team, Ndou, now 31 years old, is a former South African featherweight champion and lightweight world title challenger as a pro. He is returning to the ring for the first time since May, 2004.

2008 U.S. Olympian Demetrius Andrade, 2-0 with 2 knockouts, of Providence, Rhode Island, who is promoted by Joe DeGuardia/Star Boxing and Arthur Pelullo/Banner Promotions, will be featured in a four-round jr. middleweight bout against an opponent to be announced. After Demetrius’ pro debut in October, 2008, Dan Rafael wrote on ESPN.com: “Welcome to the pros, kid. Andrade, the first 2008 U.S. Olympian to turn pro and the American team member with the most pro potential, did what he was supposed to do: look spectacular. Andrade displayed skill, speed, poise and power…. All in all, the perfect pro debut for a fighter who could someday be a star.”

Michael Sweeney, 6-0-1 with 4 knockouts, of Ballinrobe, County Mayo, Ireland, will fight in a six-round light heavyweight bout against an opponent to be announced. A talented prospect at 26 years of age, Sweeney is a former amateur standout in Ireland – he was a four-time national champion

All bouts subject to change without notice.

With his dominant TKO victory over Miguel Angel Rodriguez this past June to claim the vacant WBC welterweight crown, Andre Berto (23-0, 19 KOs) established himself as one of boxings most feared champions. Just 25 years old, Winter Haven, Florida’s Berto has already defeated proven veterans such as Cosme Rivera, Michael Trabant and Steve Forbes. Berto will need to draw on all of this valuable experience when he takes on mandatory challenger Luis Collazo (29-3, 14 KOs). Crafty southpaw Collazo, from New York City, is poised to win his second world championship – having already reigned as WBA welterweight king.

“Berto-Collazo has all the makings of a spectacular match up. Andre’s punch volume and non-stop pressure combined with Collazo’s poise and big-fight pedigree, make this the first ‘can’t miss” fight of 2009. Let’s not forget Luis has already gone 24 competitive rounds with Ricky Hatton and Shane Mosley. This is a great opportunity for Andre to show the world the champion that he is,” said DBE president Lou DiBella.

“January 17 represents the hallmark of the Boxing After Dark franchise, featuring rising stars along with up and coming fighters and providing them a great showcase to demonstrate their talent,” said Luis Barragan, director of programming, HBO Sports. “Each fighter on the card is in a position to make a statement very early in 2009.”

In addition, fans in the live audience on January 17 at Beau Rivage Resort & Casino will get the opportunity to see local Light Heavyweight favorite Will McIntyre in an eight round bout, New York Heavyweight prospect Tor Hamer in a 4 round bout, undefeated Super Middleweight and top prospect Edwin Rodriguez from Worcester, MA in an eight round bout and Jonathan Nelson from Little Rock, Arkansas in a 6 round Super Middleweight bout.

“Beau Rivage is happy to be partnering with DiBella Entertainment and HBO Sports to bring world championship boxing back to Biloxi,” said George P. Corchis, Jr., president and chief operating officer of MGM MIRAGE’s Mississippi resorts, which includes Beau Rivage in Biloxi, and Gold Strike Casino Resort in Tunica. “The headliner of Andre Berto vs. Luis Collazo is a competitive match and the undercard bouts are bona fide prospects to watch.”

Diaz-Marquez: The Punching Machine vs. Dinamita »