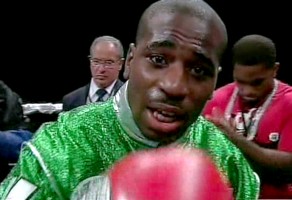 Greene, an excellent southpaw fighter with exceptional counter punching skills, appears to be being rushed way too quickly into this fight, because he doesn’t look to be ready for a fighter as polished and as professional as Martinez.

Greene, 5’10”, has fought most of his three-year professional career as a middleweight, but due in part to his limited size, he was moved down to the light middleweight division in 2008 with hopes that he would be able to match-up better with the slightly smaller fighters. Up until recently, Greene had looked good in his fights. However, in his last bout, against Jose Miguel Torres on August 13th, Greene struggled in beating him, taking a lot of punches, showing a poor work rate, weak power and a pawing jab.

The lack of hand speed was also a problem for him, which had previously been masked in his prior 19 fights due to his low quality opposition. The fight was booed during much of it because of Greene’s lack of activity and his hesitance to mix it up with Torres.

In the later rounds of the fight, Greene continued to fight off his back foot, looking to make Torres miss and taking few chances in the fight. Overall, it was an ugly fight and one that made Greene look far below other rising light middleweight prospects like James Kirkland and Alfredo Angulo, two fighters that are noted for their aggressive, crowd-pleasing styles of fighting.

Martinez, 33, is coming on an especially impressive 8th round stoppage over power puncher Alex Bunema in October. Martinez, fighting with his new Roy Jones Jr.-like style, hit Bunema at will in the early rounds of the bout, keeping bout hands at his sides and making Bunema miss with his shots by leaning away from them and making him look bad.

Martinez landed both pot shots and flurries against Bunema at every opportunity and as the rounds progressed, it was increasingly clear that Bunema had no chance of connecting with anything big enough to stop Martinez.

Two fights earlier, Bunema had stopped former IBF light middleweight champion Roman Karmazin in a shocking 10th round stoppage. However, against Martinez, Bunema would have no such luck, as he was dominated from start to finish by the Argentinean fighter. In the 7th round, Martinez hurt Bunema with a flurry of shots, and continued battering into the 8th round, leading to the fight being stopped at the advice of the ringside doctor.

Greene is a special fighter, one that may someday be a champion. However, at this point in time, it’s much too early for him to be taking on a fighter as skilled as Martinez, and I see him badly getting outclassed in this fight, and probably losing by a lopsided decision.

Martinez probably won’t be able to take Greene out, because he fights much too defensively to be hit with many shots, but at the same time, Greene’s offense isn’t nearly as good as Martinez’s, which cause Greene to fall behind in the fight as the rounds progress. Without knockout power, Greene will eventually be without a way to dig himself out of a lopsided score and will lose handily.

Is Vitali Doing Wladimir a Disservice By Fighting Haye? »