Is Paul Williams Making a Mistake By Fighting As a Middleweight? 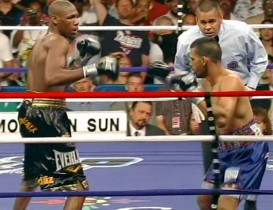 By Manuel Perez: Unable to capture a rematch with Antonio Margarito, World Boxing Organization welterweight champion Paul Williams (34-1, 25 KOs) is instead putting his foot in the water of the middleweight division against Andy Kolle (17-1, 12 KOs) in a 10-round bout on September 25th at the Soboba Casino, in San Jacinto, California. After Williams’ promoter reportedly made a $ five million dollar offer that was promptly ignored by Margarito, Williams, with the future in mind, chose to schedule a stay busy fight against the middleweight Kolle.

This isn’t a particularly dangerous fight for the 6’2″ Williams because Kolle isn’t much of a puncher despite his 12 knockouts on his record. He has faced few quality opponents during his short four year career other than Matt Vanda, whom he narrowly defeated by an eight round decision in November and Andre Ward, who stopped him in the 8th round in April 2006. Like I said, this is a stay busy fight for Williams, one in which he will get a feel for the middleweight division and see how well he’s suited for the division, while at the same time still defend his WBO welterweight title every now and then. Make no mistake, it’s a smart move for Williams to try and move to move between the divisions if he can get away with it, because the welterweights are limited at this time.

Miguel Cotto, the former WBA champion, was recently defeated soundly by Margarito in an 11th round stoppage, while other top fighters like Andre Berto, the WBC champion, isn’t likely to be interested in tangling with a fighter as tough as Williams at this point. Margarito might possibly fight a unification bout with IBF welterweight champion Joshua Clottey sometime in 2009, but that’s not definite at this point.

Other top fighters like Shane Mosley, Zab Judah and Kermit Cintron are possible future opponents, but flawed and in the case of Judah and Mosley, aging to the point where they might be around too much longer. Judah, though only 30, with four losses in his last seven fights, is more of an expensive gatekeeper more than a top contender nowadays.

Although he’s still able to bring in decent numbers of boxing fans as a still marketable opponent, his remaining days for doing so would seem to suggest that they’re winding down given his greater and greater frequency for losing.

It’s quite understandable why Williams has chosen to skip completely over the junior middleweight division, one of the more weaker divisions in boxing with few real stars other than aging champions Ricardo Mayorga, Vernon Forrest, Cory Spinks and Oscar De La Hoya. Other than De La Hoya, who would likely never choose to fighter as dangerous Williams, the other fighters probably wouldn’t bring much of a payday for Williams.

Sergio Mora, the WBC light middleweight champion, is an interesting option down the road, but at this point he’s still hasn’t build up much of a following yet. Williams would be much better served by trying to eventually line up a title shot against one of the middleweight champions like Kelly Pavlik, Arthur Abraham or Felix Sturm. Pavlik would by far be the best option, as he’s considered far and away to be the best of the middleweights, with Abraham also being a good choice. Sturm, however, would seem to be a remote possibility, as his German handlers would likely not want to risk putting in what would likely be a sure loss against Williams.

« Edison Miranda: Can He Resurrect His Boxing Career?

Campbell vs. Guzman: Look For An Easy Win For Joan »