Campbell vs. Guzman: Look For An Easy Win For Joan 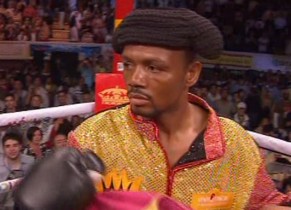 By Manuel Perez: WBO/IBF lightweight champion Nate Campbell (32-5-1, 25 KOs) will put his titles on the line on Saturday night against former two-time champion Joan Guzman (28-0, 17 KOs) at the Beau Rivage Resort & Casino, in Biloxi, Mississippi. Guzman, 32, is trained by Floyd Mayweather Sr. and, as one would guess, has a fighting style very similar to Floyd Mayweather Jr., which entails a lot of defensive movements, pot shots, flurries and lateral movement. It’s a frustrating style for most fighters to have to deal with, which makes him so dangerous as a fighter.

His power is marginal, but he more than makes up for it with his fast hands. However, he is at a slight disadvantage going into this bout as he’s moving up from the super featherweight division to take on the bigger, more powerful Campbell, and that can possibly be a problem for him. Guzman won’t likely try to stand and trade with Campbell like Nate’s last opponent did, Juan Diaz, because Guzman probably realizes that would be a recipe for defeat. Campbell is much more rugged and powerful than Guzman, and if the two were forced to go at it at close quarters for 12 rounds, Guzman would probably be taken out long before the final bell.

However, his in and out movement and fast hands make him probably the favorite in this fight. Indeed, many of the Las Vegas bettors are selecting Guzman to get the win due to his quicker hands and better movement. Guzman has yet to taste defeat, whereas Campbell has been beaten five times previously. Although Campbell is probably fighting the best of his career right now, this isn’t the type of opponent that favors his aggressive slugging style of fighting. Guzman recently easily defeated Humberto Soto, winning a lopsided unanimous decision over one of the top super featherweights in the division.

Soto’s style, an aggressive slugging style, is almost a carbon copy of Campbell’s style of fighting, consisting of a lot of hooks and uppercuts at close range. Guzman, though, foiled Soto’s offensive attacks by fighting him at range, coming in close and hitting him with fast combinations, then moving quickly away before Soto could get his own shots off. One could expect that will be Guzman’s blueprint for beating Campbell, who may find himself being beaten even more conclusively than Sotto did. Campbell may be the best lightweight in the division at this time, maybe even better than Manny Pacquiao and Casamayor, but he’s not in the class of Guzman.

Campbell is getting up there in age, close to turning 37 soon. He had at easy in his last fight against the 24 year-old Juan Diaz, who instead of making Campbell use his old legs to chase him around the ring, Diaz instead chose to fight Campbell at close range and try to beat him at what he does best – slug. As it turned out, Diaz was no match for Campbell, who after hurting his eye with a sneaky left hook – while clinching – in the 6th round, he took over the remainder of the fight as Diaz became overly concerned with his injure eye.

Guzman, however, won’t fall into the same trap that Diaz did. He’ll only come in close when he wants to land his own shots, and afterwards will get away as fast as he can. Campbell is slow of foot and will do poorly when he’s forced to chase him around the ring. Look for Guzman to win by an easy 12-round decision.


« Is Paul Williams Making a Mistake By Fighting As a Middleweight?

Bradley vs. Cherry: Timothy Will Be Too Much For Edner »