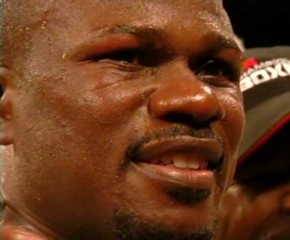 By David Lar: With only one day to go before the big WBC light middleweight rematch between champion Sergio Mora (21-01, 5 KOs) and Vernon Forrest (40-3, 29 KOs) the fan interest just isn’t there for this fight for some reason. Perhaps it’s due to the dull first fight between the two of them three months ago in June, a fight filled with running, clinching and lack of action which resulted in a 12-round majority decision win for Mora. Then again, it could be Mora’s advanced age of 37 that could be a problem because it’s hard to get excited about a fighter so far up there in age like he is.

However, Mora, only 27, is even less appealing to watch fight if you ask me. He moves constantly, uses a lot of fakes, and punches with little power even when loading up on his shots. It hasn’t helped the fight that there’s been little in the way of press statements for either fighter. You aren’t likely to hear much about either fighter no matter what internet boxing forum you might peruse, unless it’s something short, like, “how come there’s no interest in Mora-Forrest.” The answer, at least to me, seems pretty clear. Neither of these fighters fought exceptionally well last time out, and the fans, having long memories, don’t look forward to seeing them possibly make a repeat performance of the first fight.

In this particular case, Mora fought as well as he could last time out using all the tools, mostly finesse-oriented, that he knows how to use. He won the fight, yet lost the war in terms of drawing fan interest towards his side. Mora took over the fight after the first couple of rounds of strong power shots from Forrest, outworking the former champion the rest of the way with ease. It was more of a case of the younger fighter having more of what Forrest didn’t have any longer, namely energy. Forrest has vowed to come in to this Saturday’s fight a new man, in better condition and ready to fight hard for a full 12-rounds.

That will be interesting to see if true. He looked older than 37, though, more like a fighter in his mid 40s then his true age, and he didn’t appear to be out of shape in the least. He just looked old. At his age, most fighters have long left the sport to other endeavors, like training, for instance. So, Forrest actually fought as well as he could with what he has left in the tank.

Like a car with 300,000 miles on it, Forrest isn’t able to fight as hard as he once was earlier in his career. His situation is made worse by the fact that he’s fighting someone like Mora who specializes in making his opponents look bad by missing punches and having to chase him around the ring.

This isn’t the type of fight where Forrest can fight at a leisurely pace, taking his time to walk down Mora. Instead he has to fight hard, chase, work on the inside and use his legs to try and cut off the ring on the quicker Mora. Naturally, this kind of cat and mouse game is somewhat tedious to watch for the average fan, spoiled by matching MMA fights, who prefers nonstop action rather than a boxing chess match.

« De La Hoya-Pacquiao – In What Round Will Manny Be Knocked Out?

Haye: “I Might Have To Fight Both The Klitschkos To Unify The Titles” »