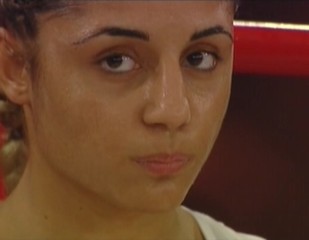 By Erik Schmidt: Undefeated WIBF/WBA world female flyweight champion Susi Kentikian (21-0, 16 KOs) will be facing perhaps her toughest opponent of her short career on August 29th when she takes on Hagar Finer (17-6-3, 4 KOs) in a scheduled 10-round title bout at the Burg-Waechter Castello, in Dusseldorf, Nordrhein-Westfalen, Germany. Kentikian, only 20, will be making the 7th defense of her WBA flyweight title and her 3rd defense of her WIBF title, both of which she earned in the past year. Since turning professional in 2005, Kentikian has quickly moved up the ranks, beating experienced top fighters in the flyweight division, and has taken over the mantle left behind by the previous top female boxer in Germany Regina Halmich who retired in November 2007 after holding onto the WIBF title for an incredible 12 years in succession. Kentikian can hope to be as good as Halmich was while holding onto her title for so long.

Originally from Yerevan, Armenia, Kentikian immigrated to Germany and has lived in Hamburg since 1996. At 5’1″, she’s short but powerfully built, with fast hands and knockout power in either hand. To look at her, she looks almost peaceful before starting her fights, but once the bell rings in the first round, she is generally all over her opponents, burying them with powerful shots to the head and body. In her most recent fight, she stopped Mary Ortega in the 1st round on May 10th. Kentikian dropped Ortega in the opening seconds of the fight with combinations.

It was more of a flash knockdown then a case of her being hurt. However, a short time later Kentikian dropped Ortega for a second time, this time with a huge right hand to the head. After she got up, Kentikian unloaded a storm of punches on her causing the referee to step in between them and halt the fight. Ortega looked as if she could still fight, seeming to be unhurt, but she didn’t have the defense or speed to match the blurring shots that Kentikian was landing on her and for this reason it was probably best that the fight be stopped when it was.

In Kentikian’s fight earlier in 2008, on February 29th, against challenger Sarah Goodson, Kentikian, again, proved to be far too talented for her opponent, who she overwhelmed with punches, knocking her down with a big body shot in the 3rd round and causing the fight to be stopped. Using a steady body attack and very few head shots, Kentikian worked the soft midsection of Goodson, pounding her at will and hurting her often in the fight.

Having moved up in weight to challenge Kentikian for her title, Goodson appeared to have put on the weight far too quickly, with much of it being fat that accumulated around her middle. Kentikian appeared to seek out the area, perhaps knowing that Goodson wouldn’t be able to stand up to a heavy barrage of punches for long without going down.