Did Pacquiao Disrespect De La Hoya By Walking Away? 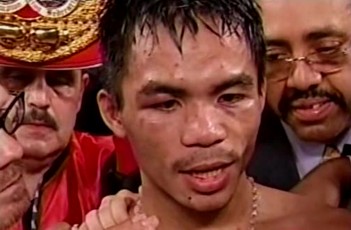 By Manuel Perez: As the saying goes, Pride goes before a fall. This was never more the case when World Boxing Council lightweight champion Manny Pacquiao refused the 70-30 purse split offer so generously offered up by Oscar De La Hoya for their December 6th bout. Pacquiao not only turned it down, but walked away from the bargaining process completely, leaving De La Hoya alone with egg on his face. It’s not something that a proud fighter like De La Hoya is accustomed to, and I doubt that it will be forgotten now, even if Pacquiao were to have a change of mind and suddenly want the fight.

I think it’s reached the point where De La Hoya wouldn’t take a fight with Pacquiao, even under the 70-30 terms previously offered to the Filipino star. I know for some people, particularly young and impatient boxing fans, they may see this as a good thing, a feather in Pacquiao’s cap, him standing up to Oscar like that. However, he seemed to lose track of what he was dealing with in this case. This was Oscar’s last fight of his career, not the first or the 15th, it was his last fight, and out of respect for the man, you have to let him dictate the terms. After all, De La Hoya has proven himself over the years in the ring, both in his winning of countless championships including an Olympic Gold medal at the 1992 Olympics, but also as the hugest PPV attraction in boxing.

For Pacquiao to lose sight of all this and show disrespect for Oscar by suggesting that he should be able to come in at nearly the same rate as him, was a huge insult to Oscar, because he was the real star between two of them. Oscar chose him out of all the other people he could have selected for a fight, and put his time into trying to make the fight happen, and then to have Pacquiao think that he could share almost equal the PPV money as De La Hoya, was a real oversight on his part. Oscar deserves more because he’s the bigger star, period.

Pacquiao, as good as he is as a fighter, is nowhere close to being as popular as Oscar is around the world, and that’s not something that’s even debatable. Even if Pacquiao were to finish the rest of his career without being beaten again, he’ll still not come close to being as popular as De La Hoya is. I think Pacquiao seemed to lose sight of whom he was dealing with, thinking that maybe because Oscar has been less than successful in recent years, it meant that he deserved to get almost as much money as him.

And while it is true that Oscar isn’t the same fighter he once was, which is why he’s decided to retire, he’s still box office gold and can make huge PPV against almost anyone. Pacquiao needed to listen to someone before hastily walking away from the bargaining table and insulting Oscar like this, because not only did he make Oscar look bad, he also screwed himself out of the biggest payday of his career by far.

Pacquiao is good, but at his age nothing is guaranteed – that was already proven in his upset loss to Erik Morales a couple of years ago. Pacquiao could very well get beaten in his next fight, likely against Humberto Soto, and then lose out on future big money fights against other top fighters. If nothing else, if he cares little about showing respect to Oscar in his last fight of his career, he should have been mindful of the big money he was walking away from potentially.

Amir Khan vs. Breidis Prescott: Is This a Step Back For Khan? »