Amir Khan vs. Breidis Prescott: Is This a Step Back For Khan? 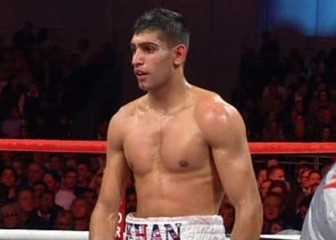 By Nate Anderson: In a rather curious move, undefeated top lightweight contender Amir Khan (18-0, 14 KOs) has chosen Colombian knockout artist Breidis Prescott (19-0, 17 KOs) as his next opponent to defend his little known WBO Inter-Continental lightweight title against at the M.E.N. Arena, in Manchester on September 6th. Although Prescott, 23, is undefeated and has fought one more fight than Khan, he’s nowhere near the same class as Khan and is a huge step back from whom Khan has been facing previously to this point in his early boxing career.

It’s not surprising, I suppose, especially after the way Khan, 21, performed in his last fight with Michael Gomez, who knocked him down in the 3rd round of their June 21st bout. Although Khan would get up off the deck and eventually stop Gomez in the 5th round, Khan didn’t look good, seeming worried when being pressured by Gomez. Indeed, Khan looks visibly stressed when being pressured, reminding me a lot of how Wladimir Klitschko sometimes goes to pieces mentally when having an opponent apply a lot of pressure against him. If this was the only circumstance when Khan looked observably stressed out when being attacked hard, I wouldn’t mind so much, but this is just another example of Khan looking bad when put under the gun by an opponent. What was interesting was how he reacted to the pressure, which showed itself in him running a lot, and shoving Gomez hard quite frequently.

The running was okay, since it was legal, but the hard shoving that Khan was doing was something that in most countries would have caused him to be warned and eventually docked a point if he continued to use this. It’s not as bad as rabbit punches or throwing elbows, but it’s not fair and is similar, I suppose, to holding onto an opponent to keep them from punching back. The fact that Khan had to resort to shoving his opponent, particularly a fighter not nearly in his class, hard on a frequent basis, didn’t make Khan look good.

He should have been able to use other tactics, like moving, punching or torso movement if he was worried about being crowded by Gomez. However, in this case, Gomez, the shorter fighter, wasn’t crowding Khan; he was only trying to get into punching range, and yet found himself being shoved hard by Khan. Like I said, this is something that would likely cause Khan to be warned and eventually penalized if he were to use this tactic in other countries, especially the U.S.

Prescott has excellent power, definitely a class above Khan, but his has speed is rather poor and he isn’t good at cutting off the ring. In his last fight against Richard Abril in June, Prescott looked slow, and had big problems against the former Cuban amateur star. In the end, Prescott narrowly pulled out a 10-round decision but it could have gone either way. That said, Prescott is a pressure fighter, and will no doubt be pursuing Khan hard from round one until the end of the fight. If Prescott can land anything big, he has more than enough power to take out the shaky-chinned Khan and I imagine he’ll be making Khan nervous as you know what with his big shots.

At 5’11”, Prescott will be the biggest opponent that Khan has faced in his early career, meaning that Khan won’t be able to be content with jabbing away on the outside. If he plans on defeating Prescott, Khan is going to have to trade with him at some point, because Prescott is going to be bringing it, forcing Khan to fight with him toe-to-toe. I imagine Khan will be running to get some distance between the two, but he’s going to have to stop at some point and go to war with Prescott if he hopes of beating him.

« Did Pacquiao Disrespect De La Hoya By Walking Away?

De La Hoya-Pacquiao: 65-35 Split Might Not Be Good Enough For Manny »