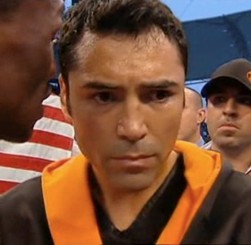 By Jason Kim: The Oscar De La Hoya sweepstakes continue as the CEO of Golden Boy, Richard Schaefer, said yesterday that De La Hoya is now considering a fight with the following opponents, Ricky Hatton, Sergio Mora, Paul Williams, Roy Jones Jr. and Shane Mosley. De La Hoya, 35, was previously working on a fight with Manny Pacquiao, but that fight fell through when Pacquiao failed to accept Golden Boy’s offer of a 30% share of the PPV revenues for the fight. Pacquiao, however, was looking at getting at least 40%.

Rather than give in to Oscar’s wishes and accepting an offer that he felt was unfair, Pacquiao walked away, leaving Oscar without an opponent once again. Not to be one to just sit and mope about the turn of events, De La Hoya has immediately started looking at other options. A name conspicuously missing from the list of fighters named was Antonio Margarito, a tough all offense fighter who recently dethroned Miguel Cotto last month.

De La Hoya, however, doesn’t want to fight him because, A. He’s a Mexican and Oscar doesn’t want to fight a Mexican fighter in his final fight of his career, although Mora is Mexican. B. Margarito has unfinished business with Paul Williams, who previously defeated him by a close 12-round decision in 2007. All good excuses, I suppose, if you were looking at this all through a child’s mind.

It’s unclear why De La Hoya would add Mosley’s name to the list. Although Mosley twice has beaten De La Hoya in the past, once in 2000 and another time in 2003, he now works for De La Hoya and it would be hard to imagine that he would forget that fact in a fight with him. After all, De La Hoya would be technically his boss and for that reason it would be hard to imagine that he would be fighting as hard as he could otherwise knowing that it might affect his future. That fact that his name even popped up makes me think that was De La Hoya’s idea, because it seems almost insane. I’m sure a certain amount of the clueless boxing public could suspend belief and buy into the fight, but for knowledgeable people, they wouldn’t see the fight as being on the up and up, and hence would downgrade it and avoid it like the plague.

I’m not sure how De La Hoya could land a fight with Roy Jones Jr., since he has a fight coming up already with Joe Calzaghe in November, and there’s no way that Jones would be ready for a fight a month later in December, unless he scored a quick knockout victory. Most people don’t give Jones much of a chance to beat Calzaghe, so I’m not sure how he would even figure into the equation. That is, unless De La Hoya doesn’t care whether Jones wins or loses, he wants to fight him anyway.

As for Hatton, he’s tied up with a fight with Paulie Malignaggi in November, and certainly won’t be available to fight De La Hoya a month later regardless of how easily he defeats Malignaggi. The fight would be an interesting one if Hatton were available or if De La Hoya was interested in waiting until 2009, but I don’t think that’s going to be the case. De La Hoya has made it clear that he intends on hanging up his gloves on December 6th, so that effectively rules out Hatton.

Paul Williams, much like Margarito, would be an ideal opponent for De La Hoya. Perhaps the best welterweight in the division, he would give De La Hoya a sense of legitimacy, something that he’s been missing out on for quite some time. If De La Hoya wanted to bow out of boxing with respect from boxing fans, this would be an excellent choice for him to make. I don’t think he will, of course, because Williams would likely beat him as bad as Margarito, but it would be a good choice all the same.

Of all the potential opponents listed, Mora, the WBC light middleweight champion, would be the least attractive of the bunch. Though he holds a title, he’s not well known by many fans and it would be a fight that would largely be of interest in the East Los Angeles area, where both Oscar and Sergio come from. For this fight to happen, however, Mora still needs to beat Vernon Forrest in their rematch on September 13th, which will be an extremely tall order for the limited Mora to accomplish. He did it once, but Forrest looked sluggish on that night, like he wasn’t mentally or physically prepared to fight. If Forrest does defeat Mora, it would be interesting to see if Oscar is at all interesting in fighting him. My guess is no.

« Does David Haye Deserve To Be Ranked #3 In The Heavyweight Division?

Did Pacquiao Disrespect De La Hoya By Walking Away? »