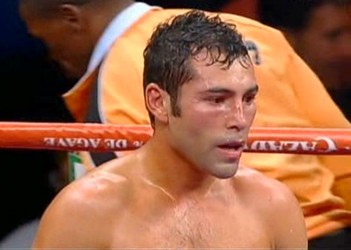 By William Mackay: According to reports from fightnews, Manny Pacquiao has turned down an offer of a 70-30 split from Golden Boy Promotions for a potential December 6th fight with Oscar De La Hoya. Pacquiao wanted a 60-40 split, but De La Hoya’s Golden Boy management team where firm with the original 70-30 split. Instead of taking the offer, Pacquiao will either stay at lightweight or possibly move back down to the super featherweight division where there are opponents like Edwin Valero and Juan Manuel Marquez waiting for Pacquiao.

Both De La Hoy and Pacquiao had previously been stuck on the purse split issue and glove sizes (Pacquiao wanted the smaller 8-oz gloves while De La Hoya wanted the large 10-oz gloves. However, the purse split was the real issue, as Pacquiao, by far the better fighter at this stage in his boxing career, wanted a 60-40 split given his talent and his huge popularity among boxing fans.

Don’t be surprised if negotiations restart almost immediately, however, because I doubt that either De La Hoya or Pacquiao will want to walk away from this fight and throw away big money for either of them in the process. Whether the fight have a 60-40 or 70-30 split, it’s much more money than either of them can get by fighting other opponents, with the exception of a bout with someone like Ricky Hatton or the now retired Floyd Mayweather Jr.

De La Hoya, 35, a star at the end of his career, has taken a tremendous amount of heat by the boxing public for choosing to fight a smaller opponent like Pacquiao, and given all the criticism that has been leveled at him, I’m not surprised that he’s remained firm on his 70-30 split deal. He perhaps sees this as a fight as a fight that he could take it or leave it, one that probably leaves him feeling a little conflicted over due to the harsh criticism that has been leveled at him by all sides.

Other than a fight with him, there’s always Calzaghe, Kelly Pavlik, Hatton, Winky Wright, or rematches with Felix Trinidad or Shane Mosley for him to look at. A fight with Trinidad would be very appealing to fans considering that De La Hoya never avenged a previous 12-round majority decision loss to him in September 1999. Though Trinidad isn’t nearly as good as he used to be, neither is De La Hoya. At least by facing Trinidad, De La Hoya could go out of boxing on a positive note.


« Audley Harrison – Where did it all go wrong

With Pacquiao Out of The Picture, Who Should De La Hoya Fight? »