With Pacquiao Out of The Picture, Who Should De La Hoya Fight? 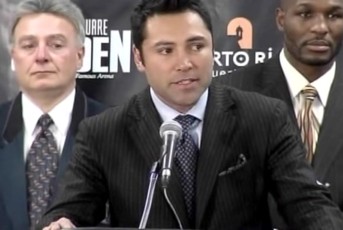 By Aaron Klein: With today’s bombshell announcement that Manny Pacquiao has pulled out of the negotiations for a fight with Oscar De La Hoya, turning down a 70-30 purse split, just who now should De La Hoya fight on December 6th? To be sure, Pacquiao still would probably be the best option, but De La Hoya doesn’t want to budge from his original offer to meet the 60-40 split that Pacquiao is interested in. In turning down the fight, Pacquiao seems to acting on principal, since he’s walking away from what would likely be none to ten million dollars that he would earn for the fight if he were to take the 70-30 split. Not bad money for any fighter to take, and a number that is three to four times what Pacquiao normally gets for his fights.

Knowing how much money he’s walking away from, you got to respect Pacquiao for sticking to his guns and not allowing himself to accept anything lower than what he asked for. This leaves De La Hoya – again – without an opponent for his last fight of his boxing career. Previously, Floyd Mayweather Jr., who had been thought to be De La Hoya’s last fight of his career, suddenly retired, leaving De la Hoya scrambling for an opponent.

Ricky Hatton was considered, but he couldn’t take the fight because he was already signed for a fight in November against IBF light welterweight champion Paulie Malignaggi, and he couldn’t possibly be ready to fight a month later in December against De La Hoya. If Pacquiao doesn’t have a change of mind or if De La Hoya doesn’t back down and come up with a better offer, the question of whom De La Hoya fights next is largely unknown at this point.

1.) Antonio Margarito – For many fans, the two-time welterweight champion would be the most appealing opponent De La Hoya could select. However, Margarito is younger, stronger and has an enormous work rate and would likely not only beat De La Hoya, but give him a terrible whipping in the process. I think for De La Hoya, he doesn’t want to be remembered getting his face torn off in his last fight of his career. This is a fight that would likely not be competitive at all, for Margarito is a lot better than De La Hoya, perhaps better than he ever hoped to be in his entire career. Although Margarito doesn’t get the enormous press that De La Hoya does, I think Margarito would have destroyed a younger version of De La Hoya with about as much ease as he’d beat an older version. I doubt that De La Hoya will change his mind about him and decide to fight him. He’s still dangerous and De La Hoya won’t want to take a beating.

2.) Paul Williams – My comments about Margarito pretty much apply the same with the 6’2” Williams, who currently holds the WBO welterweight title. Williams would corner De La Hoya and him down with shots to the head and body. I see this as a six-round fight, with De La Hoya collapsing from a body shot and rolling around for awhile on the canvas while being counted out. De La Hoya won’t choose Williams, either, knowing that it would be another beating.

3.) Miguel Cotto – This would be an appealing fight for boxing fans, and a very winnable fight for De La Hoya. Cotto is coming off a terrible beating at the hands of Margarito in July, and it’s questionable how much Cotto has left after the defeat. He might jump at the money if De La Hoya gives him a decent split, but due to the beating he took last time out, it would be better that Cotto avoid this fight.

4.) Felix Trinidad – Having previously defeated De La Hoya none years ago, Trinidad would be a good opponent for De La Hoya. It’s sad, though, that De La Hoya never pursued a rematch with him all these years and tried to clear up the defeat, but whatever the case, better late than never. The boxing fans love this fight, with most Americans preferring to see it than De La Hoya facing Pacquiao.