Audley Harrison – Where did it all go wrong 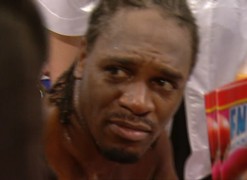 By Abbas Dadhiwala: When Audley Harrison won the Olympic Heavyweight Gold Medal in the 2000 Olympics in Sydney, he should have been a World Champion within 4 years, but that was not the case and what many believed the start a journey that would lead him to Unifying the Heavyweight Championship of the World just like Lennox Lewis never happened.

After the A-Force won the Gold Medal, he was awarded an MBE and had promoters from all over the World clamoring for his services, these included Don King, Bob Arum and Frank Warren, but Audley decided to go it alone and cut out the middle man. The BBC paid him a million dollars for his first 10 fights and this seemed to be the start of the downfall for Harrison.

Initially, he fought journeymen and club fighters brought over from America to make Harrison look good. It should have cleverly picked fighters who would make him look good, but also give him a good boxing fight so he can learn from each fight as they go on. After he stopped Matthew Ellis in two rounds in May 2003, Harrison should have arranged a fight with Herbie Hide, as they had a war of words going on at the time. However, my guess is Harrison didn’t want to go for Hide, who at the time had a devastating knockout record, with his only losses occurring to Vitali Klistchko, Riddick Bowe, and Joseph Chingangua. So we know why Harrison was apprehensive about fighting Herbie Hide .

Harrison was criticized in the boxing press for his seeming unwillingness to take on his fellow British contenders, so he tried to arrange a fight with Frank Bruno, who was 41 at the time, to give himself much needed exposure and fight a opponent with a bit of a name.

Later, Harrison relocated himself to America, which he could easily afford to do. After all, the BBC were paying him $1 million, a good sum for fighting so called bums. However, he kept fighting Club Fighters, like Quinn Navarre in nightclub,s definitely a far cry from the Wembley Arena and York Hall. He also fought Julius Francis and Tomasz Bonin in dull fights, and that apparently was the final straw, as the BBC didn’t renew the contract. Even though Harrison was criticized as being dull and boring, he refused to be associated with any promoter, even in a joint deal and kept on promoting himself. By this time, the press had given him the nickname “Fraudley Harrison.”

Finally, in 2005, Harrison appeared against a decent opponent in Danny Williams, in what was a boring fight on a Frank Warren show in London. As it turned out, Harrison was knocked down in round 10, although he did rally in round 11, hurting Williams. Unfortunately for Harrison, he lost a split decision.

A year later, in December 2006, Harrison boxed Williams again, he looked good commanding the centre of the ring, working behind a strong jab and picking Williams off with sweet lefts, with one shot in particularly busting Williams’ nose. Harrison finished the job off in three rounds, and for many fans, they thought the real Audley Harrison had finally stood up on his hind legs.

In early 2007, Harrison thought Michael Sprott in what should have been an easy stoppage win. Harrison set about doing this and knocked down Sprott in the 1st round. But shortly thereafter, Sprott swung a big left hand and caught Harrison flush on the chin, and it was lights out Audley Harrison, with A-Force flat on his back on the canvas.

Harrison is scheduled to meet Prizefighter Champion Martin Rogan at the MEN in September alongside Alex Arthur and Amir Khan, and I am hoping he takes this chance with both hands. This is definitely the last chance saloon for Audley Harrison, and the boxing world waits to see if he can finally become World Champion or be another wannabe.

« Will Cotto Ever Be The Same Again?