Will Cotto Ever Be The Same Again? 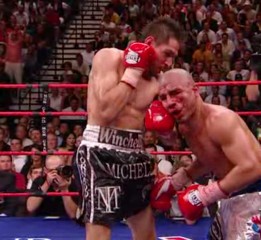 By Sean McDaniel: After taking a brutal beating at the hands of punching dynamo Antonio Margarito on July 26th, there are a great many questions from boxing fans about the future of former WBA welterweight champion Miguel Cotto (32-1, 26 KOs), about whether he’ll ever recover from the savage beating he took from Margarito on that night. To be sure, it was the type of beating that often stays with a fighter for the rest of their days, haunting them both mentally and physically, lessening their ability to take punches without going down – or in the case of Cotto, dropping to a knee multiple times to signal surrender at the hands of his conqueror.

I think even under the best of circumstances in with Cotto being matched carefully for a year or two, he still might not be the same fighter that he was previously. He took too many head shots in the fight, and the damage may have been a little too much for him to shake off the effects in such a short period of time. The brain heals more slowly than any other organ, both physically and mentally, and it will be a major work for Cotto to recover from the type of fight that Margarito put him through. In the rumor mill, Cotto has come out saying that he’d be interested in a fight with Kermit Cintron, a fighter with even more power than Cotto or Margarito.

If that does turn out to be the case, we may be seeing another brutal knockout loss for Cotto, because it’s way too early, as far as I’m concerned, for him to be fighting an opponent with the kind of monstrous power as Cintron possesses. He may not look particularly powerful when you first take a glance at Cintron’s wiry frame, but looks are deceiving as he hits like a locomotive with his right hand and hit well with his left as well. I think Cotto would be risking fate by taking on a slugger like this, because Cintron will be smelling blood coming into a fight with a damaged fighter like Cotto is, and will no doubt be throwing every punch with knockout intentions.

Don’t get me wrong, I think Cotto may very well be good enough to stop Cintron and win the fight with ease, at least that would have been the case prior to his loss to Margarito. However, the damage that he took against Margarito will make him vulnerable to an even harder puncher like Cintron. Don’t forget, Kermit has only been beaten twice in his career, with both losses occurring against none other than Margarito.

In each fight, Cintron lost pretty much for the same reason that Cotto lost to Margarito; In other words, he couldn’t match Margarito’s output, and quickly began to take too many shots, and was eventually just riddled to pieces by Margarito. However, in the first fight, Cintron stunned Margarito early in the fight but wasn’t able to finish him off due to Margarito’s excellent recuperative powers. As if yet, Cintron hasn’t been beaten by a fighter that throws punches at a lower rate like Cotto, and he might not have trouble tracking the low number of shots that Cotto throws at him.

Ideally, Cotto should focus on fighting strictly bottom 15 opponents, or better yet, decent B level fighters, for the time being until he’s absolutely sure there’s no residual effects from his tough fight with Margarito. There’s no shame in being careful after a loss like the one that he sustained, and at least by fighting a few fights, he’ll have a good idea where he’s at both mentally and physically.

Audley Harrison – Where did it all go wrong »