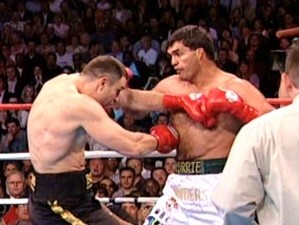 By Eric Thomas: In the latest boxing news, former WBC heavyweight champion Vitali Klitschko (35-2, 34 KOs) has reportedly signed on to fight current WBC heavyweight champion Samuel Peter (30-1, 23 KOs) on October 11th, likely to be at the Os World Arena, in Berlin, Germany. Although Vitali has signed on for the fight, it doesn’t necessarily mean that he will make it to the fight given his recent history of canceling bouts due to various injuries of one kind or another. At this date, Vitali has canceled his last four bouts due to injuries to his knee and back.

However, Samuel Peter, 27, is very eager to fight Vitali, wanting to get revenge for an earlier loss three years ago to Vitali’s brother Wladimir, who defeated Peter by a 12-round unanimous decision in 2005. Peter recently said that Vitali will have to take his punishment “like a man,” which seems to indicate that Peter isn’t particularly impressed with Vitali’s courage at this point. If Peter is successfully in defeating Vitali, which considering Vitali’s four years in inactivity is a high likelihood, then Peter wants to take on Vitali’s brother Wladimir immediately after that, a fight which would set up another “Revenge of the brother” type scenarios.

Both Vitali and Wladimir have previously gone through this twice before, with Wladimir defeating Chris Byrd in October 2000 for him having earlier in the year stopping Vitali in a 9th round stoppage in which Vitali quit on his stool after injuring his shoulder in a bout fought in April 2000.

Vitali returned the favor by giving knockout artist Corrie Sanders a savage beating, stopping him in the 8th round in a revenge match on April 24th, 2004. Sanders had previously erased Wladimir a year earlier in a 3rd round TKO in March 2003, a fight where Wladimir was knocked down three times.

In this case, Vitali might be more valuable to Wladimir if he loses to Peter rather than beats him, because if he loses to Peter, which as I said is a probably outcome now that Vitali has been out of boxing for such a lengthy time (four years), it would set up the perfect revenge matches in which Wladimir can try to make right the wrong that has occurred to his brother Vitali. That alone would make a fight that would be merely popular in its own right, a fight that would be then much bigger.

At the same time, it would give Peter a little more time to get better known to boxing fans around the world. After all, he only recently defeated Oleg Maskaev by a 6th round TKO to win the WBC heavyweight championship, and there are still a lot of people (casual boxing fans) that don’t know of Peter as of yet.