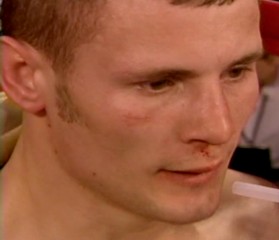 By Chris Williams: Super middleweight contender Robert Stieglitz (32-2, 20 KOs) stopped Fawaz Nasir (13-3, 8 KOs) in the 5th round of a scheduled 8-round bout on Friday night at the Rundturm Arena, Cuxhaven, in Niedersachsen, Germany. The end came in the 5th round when Nasir suddenly stopped fighting and took a knee after getting hit with a hard combination from Stieglitz. Nasir, 28, grabbed for his shoulder, and immediately complained to the referee that he had injured it while fighting. The referee then promptly stopped the fight at 1:35 of the 5th round.

Stieglitz, 28, originally Ejsk, Russia and now living and fighting out of Germany, was coming off an 8th round stoppage in his last fight to Librado Andrade in a IBF super middleweight title eliminator bout in March. Still ranked high at number #4 in the IBF, Stieglitz was thought to be taking a step down in competition by facing the 28 year-old Nasir in an eight-round bout. However, the fight turned out to be much more competitive than most people thought it would be as Nasir, from Denmark, landed well frequent double jabs in the 1st round, hitting a surprised-looking Stieglitz often as he was coming forward.

Stieglitz, who has a good jab of his own, wasn’t able to successfully trade jabs with Nasir and had to start brawling near the end of the round to make up the difference. It appeared, though, that Nasir had done enough to win the first round based on his earlier work in the round.

The second round was similarly close, as Nasir repeatedly drilled Stieglitz in the head with power jabs and keeping him on the outside where he was much more harmless. Initially, Stieglitz had attacked hard at the start of the round, driving Nasir to the ropes for a brief spell. However, came off the ropes and began firing his lightning fast jab over and over, catching Stieglitz, who appeared to think better of his all out attack.

From there, Stieglitz began to throw jabs of his own, which set up his right hand that he started throwing in between jabs. Not content with this, Stieglitz then grabbed Nasir with his left hand and began hammering him with rights one after another. The referee quickly stopped Stieglitz and gave him a stern warning for his blatant holding and hitting. Near the end of the round, Stieglitz walked straight into a blistering jab from Nasir, which snapped Stieglitz’s head back as if he were hit by power shot instead of just a jab.

In the 3rd round, Stieglitz began to press forward much more aggressively, landing hard right hands and lefts to the head of Nasir. He was still getting hit with a lot of jabs, though, but Stieglitz seemed unconcerned with that now in this round, and was focusing on making it a rough fight.

After Stieglitz landed one especially hard jab-right hand combination, Nasir fired back with a perfect left hand to the head of Stieglitz, who took the shot well and continued throwing back lefts and rights of his own. Nasir, however, continued to catch Stieglitz with hard jabs as he would be coming forward with his hands held low. Even when he was in position to block shots, Stieglitz wasn’t blocking much of anything at all, though he had his gloves held up as if that were his intent.

Stieglitz’s right eye began to show signs of purple swelling underneath the eye, likely from all the hard jabs he was getting hit by from Nasir. Though Stieglitz appeared to be wearing Nasir down with his hard shots and constant pressure, the fight was far from a route which it should have been going into the fight. Like in the previous two rounds, Stieglitz attacked hard at the start of the round, and like the previous two rounds, he was repelled by hard jabs from Nasir. However, much of the round belonged to Stieglitz, who banged to the body and head with powerful rights and left hand shots. He mixed in an occasional uppercut to keep Nasir guessing.

In the 5th round, it was all Stieglitz as he attacked hard from the opening bell, hitting Nasir with one-two combinations to the head. Nasir was still throwing jabs and sometimes rights, but he was throwing them much less often and beginning to look beaten and more than a little discouraged. At one point, Stieglitz threw a leaping left hook that connected to the head of Nasir. Not to be outdone, Nasir attempted the throw the same kind of punch, and awkwardly leaped into the air and badly missed with a right. With Nasir now off balance from the attempted shot, Stieglitz nailed him with a left-right combination.

It seemed strange that Nasir would attempt to throw the same kind of punch that Stieglitz had just thrown because it was something that Stieglitz had obviously practiced a lot on throwing and something that could easily be copied by a fighter trying it out for the first time under actual fight circumstances. Right after that, Stieglitz landed one more combination to the head of Nasir, who then took a knee and grabbed his shoulder.

If his shoulder was indeed injured and he wasn’t just faking it, the injury probably occurred when he attempted to leap in the air throw a right hand. Like I said, he looked really out of position and awkward when he threw the shot and may have injured his shoulder during that time.