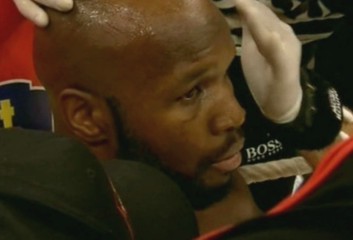 By Jim Dower: It looks as if trainer Emanuel Steward needs to go back to the drawing board with his young cruiserweight contender Johnathon Banks (20-0, 14 KOs) who looked incredibly poor in the process of defeating Italian Vincenzo Rossitto (36-6-2, 22 KOs) in a listless 12-round majority decision to win the vacant IBO cruiserweight title on Saturday night at the Color Line Arena, Altona, in Hamburg, Germany. The final judges’ scores were 115-113, 114-114 and 117-114. In this case, this is a fight in which the judges got it right; Banks, 26, appeared to do enough to win the fight based on his impressive early work in the first half of the fight, but he faded terribly in the second half of the fight, looking exhausted and almost as if he had injured himself.

Banks’ turnaround was so dramatic and sudden, that the referee Jack Reiss asked him if he had injured his hand in the 7th round, after noticing that Banks had stopped punching as often and had started uncharacteristically backing up into the ropes and covering up.

If you’d have seen the first half of the fight in which Banks was constantly coming forward firing shots, and then seen the second half where he was just trying to survive, you probably wouldn’t have believed that it was the same fighter. From rounds seven until the twelfth, Rossitto took the fight to the exhausted looking Banks, hitting him with body shots and punches to the head as Banks tried to cover up on the ropes.

For a fighter ranked #1 in the WBO cruiserweight division, it wasn’t a pretty sight to see him cowering and being battered against Rossitto, a fighter that has been knocked out by other good cruiserweights like David Haye, Alexander Gurov and Krzysztof Wlodarczyk, and who is probably no better than a C-level fighter on his best day.

Banks, 26, a three time National Amateur Champion at 178 lbs, showed little in the way of hand speed early on in the fight. Though his punches were thrown with good form, reminding me somewhat of the style of fighting that heavyweight Wladimir Klitschko uses, the speed of which they were thrown were a problem. I’d expect a little more speed from a fighter ranked as high as Banks, and minus speed, I would have thought that Banks should have a compensating plus like good power.

However, even in that category, Banks looked pretty average, no better than the moderate power of Rossitto’s shots. As such, it looked to me that Steward’s prize cruiserweight prospect was nothing more than built up hype. Sure, he had an impressive record of wins, a good knockout percentage and no losses, but the fighters he’d faced have all been pretty much lower quality fighters like Rossitto. There were no top 15 fighters on Banks’ record, and after watching how badly he performed on Saturday night, it’s perhaps a good thing that he hasn’t faced any top guys. He’d lose, and lose big.

Rossitto, 32, appeared to be just trying to survive in the first six rounds of the fight, covering up mostly, and moving a lot around the ring to try and avoid Banks. For his part, Banks tended to load up with his shots which made them appear even slower. He held his left hand low down to his side, inviting Rossitto to him, which he sometimes did, especially in the later rounds of the fight. Banks, however, seemed to act as if he were a knockout artist because he would hold his right arm cocked as if he was holding a gun and firing bullets instead of the mediocre shots that he was only capable of throwing.

I figured that was due to his soft diet of C-class fighters that he’s faced up until and including now, which appears to have warped his self perception more than a little making him think he’s a knockout artist. Rather than using sound boxing skills, like throwing combinations, Banks plodded around the ring throwing one shot at a time, admiring his work and looking as if he thought Rossitto would drop at any moment. He wasn’t going to be, as it turns out, and Banks should have adjusted his style and focused more on throwing combinations.

In the 7th round, Banks suddenly began to back up to the ropes and stay there for prolonged periods of time. Considering that he had been coming forward all fight long up until now, it appeared that it was either a stupid strategy, similar to his belief that he could take out Rossitto with one punch, or that Banks was either hurt or tired. In this case, it was the latter, but unlike most fighters, there wasn’t transition point in between. He went from working hard, throwing a lot of slow punches, to that of throwing almost none in a single instant.

Rossitto, who was running and trying to stay out of the way of Banks’ shots up until then, naturally, when seeing that Banks was doing nothing and acting like a wounded deer, he went after him and began pounding on him along the ropes. From this round on until the 12th, Rossito blasted away at Banks, who just stood against the ropes, grunting occasionally when hit by a big shot from Rossitto. In the 12th, after losing the last five rounds quite handily, Banks suddenly came alive again and started firing shots at Rossitto, hitting him with some good shots in the round.

One in particular, a powerful left hook, snapped Rossitto’s head back and sent him into full flight. For the duration of the 12th, Banks tagged Rossitto with one shot after another. What was strange about it, however, was how Banks could suddenly turn it on when in the last three minutes. If he could do it then, why couldn’t he have done the same in the prior rounds? Whatever the case, Banks showed that he’s not even close to being ready to take on a fighter like Alexander Alekseev, the number #2 ranked cruiserweight in the WBO. If they were to meet anytime soon, it would likely be one-sided slaughter with Alekseev destroying Banks. This has little to do with how badly Banks looked in this fight, and more to do with Banks just not being in the same league as Alekseev in terms of boxing skills or power. Banks appears more of a 2nd tier fighter than a 1st tier guy, and I expect that after he faces and loses badly to Alekseev, we’ll be seeing a lot more losses in the future from Banks unless he sticks to the low C quality fighters he’s been fighting.