Taylor Angered By Lack Of Respect 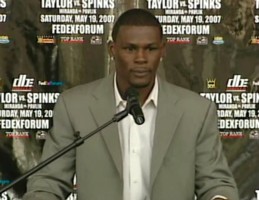 WBC/WBO middleweight champion Jermain Taylor (27-0-1, 17 KOs) has been heated all week long leading up to Saturday’s fight with #1 challenger Kelly Pavlik by the many fans and sports writers that have brushed off his career and given him slim chance at winning. Most of the criticism has been centered around Taylor’s lackluster performances against Cory Spinks, Bernard Hopkins, Winky Wright and Kassim Ouma, who Taylor struggled against. Though Taylor defeated Spinks, Ouma and Hopkins, he looked almost uncoordinated as if he didn’t know how to box properly despite his quick reflexes.

Most of the fans and sports writers were expecting the 29-year old Taylor to continue to knockout his opponents like he did earlier in his career, before he became a champion. Unfortunately, since winning the title in 2005, Taylor has been on a dry spell in which he’s been forced to earn tough fought decisions or – even worse – being held to a draw, such as the case against Wright in June 2006. However, Taylor blames his poor performances on the styles of his opponents, most of which are defensive-minded fighters, the type that are difficult to land effectively against. Taylor says that he fights better against fighters like Pavlik, the type that come directly at him and try to take him out.

Taylor understands well that a lot of things ride on his bout with Pavlik, which is a career-defining fight for Taylor, who hopes to land a potential mega bout with Calzaghe in the near future. Taylor has to not only win, but also look good in doing so if he wants to continue being a marketable fighter. Lucky for Taylor, Pavlik is the type of fighter that will force Taylor to bring out the best in his boxing game if he wants to survive in there with him. However, should Taylor fail to show courage by facing down Pavlik and trading with him, his critics will continue to hound him without fail.

While the critics have a point in their criticism of Taylor, what they fail to realize is that Taylor has fought the wrong types of opponents since winning the championship. If he wanted to look good, he needed to be fighting fighters like Edison Miranda, John Duddy and Joe Greene. In other words, sluggers, ones that you have to go to war with in order to win. Hopefully, should Taylor get by Pavlik, he can take on opponents that will truly test him with high powered offensive skills, such as Joe Calzaghe or Allan Green. Whatever the case, Pavlik and Taylor will be a shot in the arm for boxing, because the bout matches the up two of the best middleweights in years, both of them guaranteed to go directly at each other trying to tear each other’s heads off with every punch.

« Could Peter Go Another Twelve Rounds With Wladimir Klitschko?