Could Peter Go Another Twelve Rounds With Wladimir Klitschko? 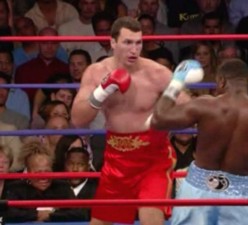 By Sasha “Kozlov” Baranov: With a little more than a week to go between World Boxing Council interim heavyweight champion Samuel Peter’s (28-1, 22 KOs) bout with Jameel McCline, I thought it would be interesting to consider what Peter’s chances would be like in a rematch with IBF heavyweight champion Wladimir Klitschko (49-3, 44 KOs). In that bout, fought on September 24, 2005, Peter knocked Wladimir down on three separate occasions and had him on the verge of being stopped in the bout. However, two of the knockdowns were the result of illegal rabbit punches to the back of Wladimir’s head, and thus should have been negated by referee Randy Neumann. Wladimir was guilty of his own issues as well by continuously clinching Peter whenever the Nigerian fighter got in close.

In fact, Wladimir initiated over 90 clinches in the 12-round bout, averaging over seven clinches per round. The tactic worked to perfection, for the most part, as Peter was unable to land effectively once he got within punching range. When Wladimir wasn’t clinching, though, he easily boxed circles around Peter, hitting him at will with jabs, straight right hands and left hooks.

Wladimir controlled almost every minute of the fight, aside from the the three knockdowns. It was really odd, because usually when a fighter is being knocked down, especially more than once, he’s taking a beating and losing the following rounds after suffering the knockdown.

In this case, Wladimir showed no ill effects from each of the knockdown and went on to control the subsequent rounds of the fight. In the 11th round, Peter legitimately knocked an exhausted looking Wladimir down and appeared to have him ready to go in the final seconds of the round. However, Wladimir escaped as the round ended just in time for him. In the next round, Peter got careless while trying for a knock out and walked into a perfectly timed left hook thrown by Wladimir, causing Peter to stagger badly. Wladimir, however, failed to go after him and finish the job. Peter took a ferocious beating from all the right hands and jabs that Wladimir had hit him with. At the end of the fight, Peter’s eyes were badly swollen, as was his lips and face from the repeated blows.

Since then, both fighters have improved considerably with Wladimir stopping his next four opponents Chris Byrd, Calvin Brock, Ray Austin and Lamon Brewster, whereas Peter struggled against Robert Hawkins, stopped Julius Long, and won two decisions over James Toney. In the first bout with Toney, Peter was far from impressive, squeaking by with a split decision in a bout in which it appeared that he lost. However, he looked much improved in the rematch in January 2007, and earned an impressive unanimous decision. For the first time in his career, Peter displayed a jab, which he used for much of the bout to control the shorter Toney.

So would Peter be able to go another 12-rounds with Wladimir if they were to meet up again? I have no doubt that Peter would be able to take any shot that Wladimir could dish out, because he has an excellent chin. Mostly, though, Wladimir will likely not put a lot of power on most of his shots, likely being afraid of being countered – or wear him self out – if he were to throw really heavy shots. However, Wladimir won’t need to knock Peter out with a single shot. Instead, I see Wladimir wearing him down with powerful jabs, and straight rights, followed by Wladimir’s most dangerous weapon, his left hook. After taking a tremendous amount of sustained punishment for nine rounds, Peter’s eyes will begin to swell shut which cause the referee to eventually stop the fight to save Peter from taking a further beating. I see Peter throwing a lot of rabbit punches before that, but this time it won’t be as much of a factor because Wladimir will be ready for them and will clinch in a tighter grasp to keep Peter from getting room to reach back and land his trademark punch.


« Valuev-Bergeron: Nikolay Back in Action On Saturday

Taylor Angered By Lack Of Respect »