What time is Demetrius Andrade vs. Demond Nicholson tonight on Showtime PPV?

By Huck Allen: Demetrius ‘Boo Boo’ Andrade will be attempting to reinvent himself in a new weight class tonight, taking on the handy journeyman Demond Nicholson in a 10 round bout on Showtime PPV at Capitol One Arena in Washington, D.C.

Andrade has given up on the middleweight division after spinning his wheels and failing to get the big names Canelo Alvarez, Gennadiy Golovkin, Jermall Charlo, and Jaime Munguia to fight him.

Demetrius’ decision to move up to 168 is based on his vision that it’ll increase his chances of getting lucrative fights, such as matches against Jermall Charlo, David Benavidez, Caleb Plant, and Canelo.

What’s interesting is that Andrade, 34, believes that he still has a chance of getting a fight against Charlo despite seven years of being ignored by the undefeated, inactive fighter.

Andrade’s inability to give up his hopeless dreams of a fight against Charlo is problematic, as he should by now understand that there’s no interest on the part of this carefully managed fighter.

Jermall has never fought anyone good during his long 15-year professional career, and there’s no reason for that habit to change at this point by agreeing to fight Andrade.

In April 2021, Nicholson went the distance with the badly flawed knockout artist Edgar Berlanga, losing an eight round unanimous decision, but ending his first-round knockout string at 16.

When is Demetrius Andrade vs. Demond Nicholson tonight?

The former two-time world champion Andrade will be fighting Nicholson tonight in the first of Showtime’s televised bouts on PPV at approximately 10:00  p.m. ET at the Capitol One Arena in Washington, D.C. The card begins at 9:00 p.m. ET.

“I’m excited to get back in the ring and showcase my talent like always, move forward, and get the guys I’m going to get,” said Demetrius Andrade to Fighthype.

“This is a step to make it happen. I can’t underestimate nobody and I need to stay sharp, focused, and disciplined to continue to have my undefeated record. Also, I want to have longevity in boxing and have the fights that I want to have.

Andrade NOT giving up on pursuit of Jermall Charlo 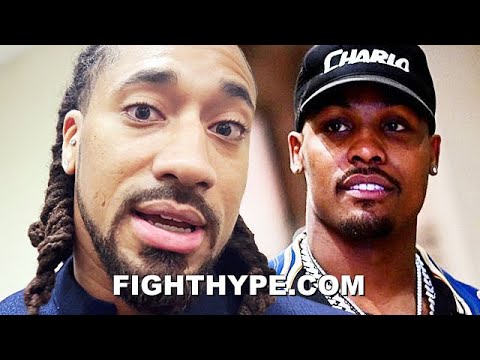 “There’s no reason why that shouldn’t happen, but moving forward, I’m here now. All those excuses they were making about why it never happened. I’m saying, ‘I’m here now. We can make it happen. There’s nothing in the way.’

“Besides that, of course, the other guys are important as well. Everyone has their time in the sport,” said Andrade when asked if Jermall Charlo is ‘Still at the top of the food chain’ and if maybe other fighters have passed him up. “There are new guys; there are guys that weren’t spectacular and got spectacular and then went back down.

“He’s still undefeated, a world champion. It only makes sense,” said Andrade, not letting loose of his single-minded focus to try and get Jermall Charlo to agree to fight him despite many years of being ignored by him.

“Of course, the other guys are important as well. I’m still undefeated, untouched. It’s all good. We can still make those things happen. It’s not like it’s too late for me.

“There’s a lot of guys out there. There’s GGG. He has the power; he has the skills. I’m not saying he’s slipped. The Canelo-GGG [trilogy] fight was the boringest fight I’ve ever seen. It was so whack, bro.

“It was like stupid. That s**t was whack. Canelo  didn’t do anything devasting to try and get somebody out that’s 40 years old, and GGG was like, ‘I’m going to take this paycheck,’ and talk about ‘Payday, payday.’

“There was no action there. No, I don’t think GGG is going to bring that fire anymore. He waited until Canelo lost, and then they used GGG to make that thing happen. Now whatever.

“GGG is still one of the best fights out there, but not today,” said Andrade.

What time is Jaron ‘Boots’ Ennis vs. Karen Chukhadzhian tonight? »