By Dan Ambrose: Teofimo Lopez Sr says his son is “coming after” Regis Prograis to beat the living daylights out of him in April and take his WBC light welterweight belt from him.

The question is, will the former unified lightweight champion Teofimo take the fight with the steamroller Prograis (28-1, 24 KOs), or is this an example of clout chasing by the struggling Teo, who has looked dreadful in his last three fights?

Based on how Teofimo looked in his last three contests against Sandor Martin, Pedro Campa, and George Kambosos Jr, Teo will lose to Prograis in a one-sided fight.

Kambosos beat Teofimo, and Sandor Martin arguably did the same but found himself on the receiving end of a highly controversial 10 round split decision loss on December 10th in New York.

After the fight, Teofimo was overheard by the ESPN camera crew saying, “Do I still got it?” The self-confidence that Teofimo once had is completely gone at this point, and that doesn’t bode well for him if he takes on a talent like WBC champion Prograis.

As Tim Bradley of ESPN points out, Teofimo doesn’t look like the same fighter he once was, and his last three fights show that something has happened to him to cause slippage in his game.

Teofimo (18-1, 13 KOs) is next up in the WBC’s 140-lb rankings for a title shot against Prograis after mandatory Jose Ramirez bowed out, saying he felt that purse split was too uneven.

With that said, many boxing fans see it as a classic duck job by the former WBC/WBO 140-lb champion Ramirez, wanting to avoid a second loss on his record.

“We want him,” said Teofimo Lopez Sr. told ESNEWS. “We want him in April. We coming after his a**.”

“My son is easy prey for Regis. So come and get it. We going to beat the s**t out of him every round.”

“My son is good with fighters that come to fight,” Teofimo Sr continued. “We’ve made a decision, and we want that fight next. We already fought [Pedro] Campas, and we already fought Sandor Martin. So we don’t need to wait for nothing else. 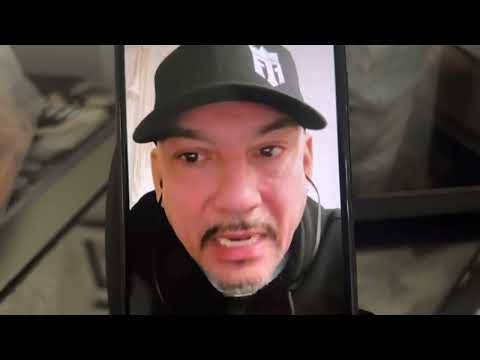 “That s**t ain’t going to work with us because my son has got his crowd; he’s got his people,” said Teofimo Sr when asked about his thoughts on a 65-35 split in favor of Prograis.

“It’s crazy that they haven’t posted the views on ESPN. I know it as over a million and a half,” said Teofimo Sr about the number of views Teo had for his December 10th fight against fringe light welterweight contender Sandor Martin on ESPN.

“Everybody wants to see my son’s demise. That means we’re special. When we had a meeting with the ESPN staff, it didn’t go too good. There was a lot of hate in the room. Even the judges have something to say about us.

“The hate is real, bro. Thank God we didn’t have the same judges as we would have had for the Kambosos fight because we would have lost that fight,” said Teofimo Sr., sounding like he’s still in denial about his son Teo’s defeat at the hands of George Kambosos Jr in 2o21.