By Sam Voz: Former light middleweight champion Fernando Vargas feels that Teofimo Lopez doesn’t need a trainer to take over for him after his recent string of poor performances in his last three fights.

Vargas says the criticism that the former unified lightweight champion Teofimo (18-1, 13 KOs) has received lately is “overdone,” He thinks there’s no need for him to get a new coach to take over his career.

Whether Vargas believes the 25-year-old Teofimo needs a new coach or not, the fact is he’s arguably lost two out of his last three fights, and looked poor in the third as well. Teofimo was given a gift 10 round split decision over Sandor Martin last December in a fight that boxing fans had him losing.  Teofimo was dropped twice by Martin in the fight and was overheard by the ESPN camera crew questioning himself after the fight, saying, “Do I still go it?”

Firing his trainer, Teofimo Lopez Sr, might not be enough for Teo to turn his career around. Teofimo looks and acts like he’s mentally not the same person he was when he beat Vasyl Lomachenko in 2020.

Unfortunately, Teofimo has changed, and it’s doubtful that he can find his way back to being the fighter he was before the start of his decline.

“That would be a good fight. Regis Prograis can fight. I was going for my boy [Jose] Zepeda, but he can box, he can punch. He’s a great fighter, a great little fighter,” said Fernando Vargas to Fight Hub TV when asked if he’d like to see Teofimo Lopez challenge WBC light welterweight champion Regis Prograis next. 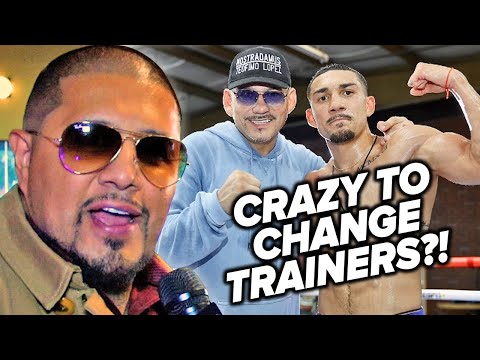 “When a fighter wins, praise to his corner. When a fighter loses, ‘They got to get rid of his corner’ when he’s the one fighting,” said Vargas when asked about his thoughts on boxing fans saying that Teofimo needs a new trainer following his controversial 10 round split decision win over Sandor Martin on December 10th in New York.

“It’s crazy because people say he needs to get a new trainer, but he was great when he was winning world titles,” Vargas continued about Teofimo.  “His trainer got him to a world title, trained him for the big fights, and he was beating these dudes.  All of a sudden, he loses, ‘you need to get rid of the trainer.’ Come on, vatos. That’s overdone,” said Vargas.

Derek Chisora on Tyson Fury vs. Oleksandr Usyk: “Both men don’t have power” »