By Dan Ambrose: Regis Prograis is warning Teofimo Lopez Sr that all the trash talk he’s been doing is going to get his son Teo hurt when he gets him in the ring to put a beating on him.

Right now, it’s unclear whether Teofimo (18-1, 13 KOs) is interested in fighting Prograis (28-1, 24 KOs) because his recent excuse about his belief that Regis can’t fight in the U.S makes it transparently clear that he has no desire to share the ring with him.

In that case, Teofimo would be following after Jose Ramirez, who didn’t want to fight Prograis either. Teofimo’s last fight against Sandor Martin showed that he lacks the talent to mix it with Prograis or any of the quality 140-pounders.

Martin beat Teofimo but lost a controversial decision in New York. Teofimo was dropped twice in the fight, and appeared to lose badly, but was given the decision.

“He’s going to get his son hurt because I don’t come to box people. I come to hurt people,” said Regis Prograis to Fighthype about Teofimo Lopez Sr. “His son is the one that has to go get in the ring.

“He don’t got to get in the ring, so he can say all that s**t all he wants. Like I said, it’s  the dog barking behind the glass. They’re saying all this stuff because they’re not going to fight me. 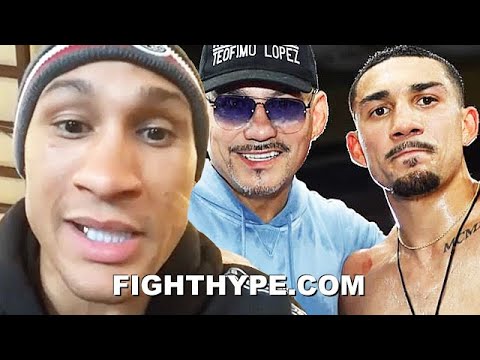 “Right now, they feel like I can’t fight here, I can’t fight in the U.S., and can’t do certain things. Once certain things are settled, and I figure out my next move, then I want to see who is talking because then it’s going to be like, ‘He can fight all these people.’

“How can’t I fight in the U.S.? My last fight was in California. The last time I checked that’s a part of the U.S, right? Like I said, in the next week, I should know more about my situation and my next move is going to be. Then I want to hear a lot of people talk after that.

“Once they know these fights can be made, then I want to hear people talk,” said prograis.