By Sean Jones: Canelo Alvarez posted on social media video of him having his cast removed from his surgically repaired left hand and him beginning his training for his May 6th fight on Cinco de Mayo.

Canelo will have to take it easy in training camp if he doesn’t want to suffer a setback and must postpone his May 6th fight.

Also, the last thing fans need is for Canelo to reinjure and compete with the injury and then potentially use that as an excuse for a lackluster performance. If Canelo is hurt, he must stay out of the ring rather than compete at less than 100%.

Although the undisputed super middleweight champion Canelo (58-2-2, 39 KOs) didn’t mention who he’ll be fighting in May, it’s expected to be John Ryder, a guy that Matchroom Boxing promoter Eddie Hearn promotes.

The 34-year-old Ryder has earned a title shot against Canelo by beating Zach Parker to claim the interim WBO super middleweight title and Daniel Jacobs. Both fights were in 2022. Going into those matches, Ryder was seen as the underdog in the eyes of many boxing fans

Hearn also promotes Canelo, so it makes sense for the British promoter to make an in-house fight between him and Ryder (32-5, 18 KOs). 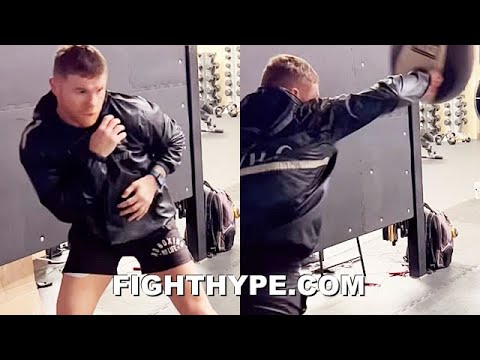 Canelo recently had surgery on his left wrist after his victory over Gennadiy Golovkin last September in their trilogy match in Las Vegas. He said he’d been dealing with the injury for a long time, but he’d held off having surgery.

Assuming Canelo gets past Ryder without any issues in May, the Mexican star will face Dmitry Bivol in September in a rematch at 168, with all four belts on the line.

You can expect a certain amount of criticism directed at Canelo by fans due to him making Bivol meltdown from 175 for the second fight, but considering how overmatched he looked losing to the WBA light heavyweight champion last May, it would make no sense for it to happen at the same weight as last time.

Canelo needs a handicap for him to have any chance of winning the rematch because he’s not a good enough boxer to beat Bivol with him at full strength and not weakened by coming down in weight.

Most boxing fans believe it’s a cast-iron certainty that Bivol will beat the brakes off Canelo next September, but you can’t rule out a controversial decision.