By Sean Jones: Golden Boy executive Eric Gomez says middleweight Jaime Munguia is interested in fighting Dmitry Bivol in 2023 and is willing to go up to 175 to make the weight to make it happen.

Gomez states that the 26-year-old Munguia (41-0, 33 KOs) has a hard time making the 160-lb limit and can easily go up to 175 to challenge Bivol for his WBA light heavyweight title.

With Bivol saying that he’d be open to going down to 168 for the Canelo Alvarez rematch, he could potentially do the same thing for a fight with Munguia if it’s worthwhile.

It’s unclear how much fan interest there would be for a fight between Munguia and the untested ten-year pro Munguia, who hasn’t fought anyone of note during his long career. Arguably the best guy Munguia has fought to date was journeyman Gabe Rosado in 2021.

Munguia’s promoter Fernando Beltran of Zanfer Promotions, is interested in the Bivol (21-0, 11 KOs) fight as well for his fighter.

“There is also a lot of interest in doing the fight with Bivol, which is one of the fights that Jaime is very interested in. It’s what he wants, the big fights this year,” Golden Boy executive Eric Gomez said to ESPN KNOCKOUT.

Bivol’s promoter Eddie Hearn of Matchroom Boxing, wants to put him in with #1 WBA Joshua Buatsi in April, which would be an in-house fight for the British promoter. That fight does nothing for the U.S. fans, who have never seen or heard of Buatsi.

A far better fight for Bivol would be to take on Munguia because hardcore boxing fans in the States know him, and it’s a match that would attract some of the casuals.

“One thinks it’s crazy because he [Munguía] has been fighting at middleweight, but Jaime and Fernando Beltrán himself [Zanfer president] see something they like, and Jaime is big, very strong. He has to work hard to reach 160,” said Gomez.

Munguia is HUGE for the 160-lb division, and it’s evident that he needs to be fighting, at the very least at 168, because he resembles a light heavyweight after he rehydrates for his fights. 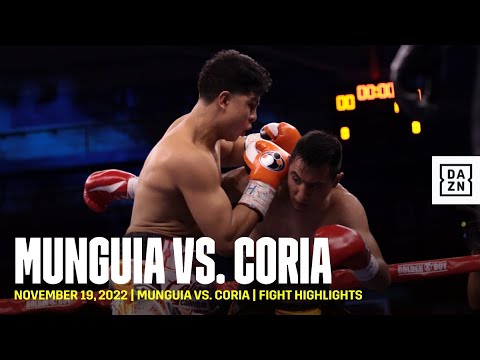 In recent fights, Munguia has beaten these lackluster guys:

Besides Bivol, Munguia wants to face Gennadiy Golovkin and Jermall Charlo in 2023. Whether either of those fights will happen is unknown.


« Callum Johnson previews Beterbiev vs. Yarde: “Anthony must be his best ever” to win