By Sam Volz: Little-known fringe contender Demsey McKean is in the running to be the opponent for Anthony Joshua’s April 1st fight in the UK.

The unbeaten 6’6″ southpaw McKean (22-0, 14 KOs) is the frontrunner for the fight with the former two-time heavyweight champion Joshua (24-3, 22 KOs), who is desperate for a win at this point of his ten-year career after losing two in a row to Oleksandr Usyk.

McKean, 32, says the one thing that could get in the way of getting a fight with Joshua is that he’s a southpaw, and that could be a problem.

Joshua can’t afford another setback at this point in his career because that would be a strong signal to him and the boxing world that he needs to hang up the gloves.

Joshua’s promoter Eddie Hearn wasn’t kidding when he said he was looking for a top 20 contender, but what he didn’t say is that the opponent would be more toward the bottom of the rankings.

McKean has never beaten anyone notable during his nine-year professional career, and, oddly, his promoters didn’t step him up a long time ago because he’s been spinning his wheels and going nowhere.

Boxing fans would prefer for Joshua to use the washed Dillian Whyte as his tune-up opponent than an obscure fighter like McKean, but obviously, Hearn doesn’t want to take any chances with AJ getting beat again.

Even a totally shot Whyte might have enough left in his empty tank to defeat Joshua at this career stage.

“I’m one of the frontrunners for this fight, and hopefully it can be made,” said Demsey McKean to International Boxing News about him being in the running for Anthony Joshua’s next fight on April 1st.

“It’s a life-changing fight for myself. A win here could do amazing things for my career. It’s massive. The only thing that could be holding me back is being a southpaw. These guys are supposed to be the elite of the game. 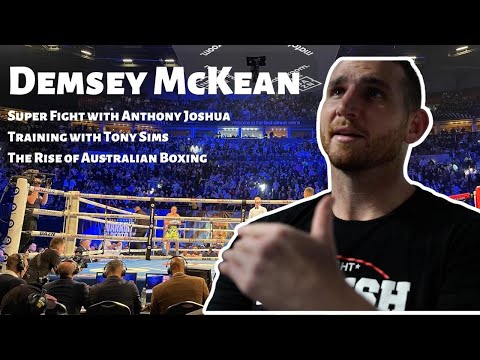 “I’ve been on the fringe for some big fights lately. They’ve all fallen through because I’m a southpaw. That’s a pretty poor excuse. Some people don’t want to take certain fights. Hopefully, AJ can man up and take this fight against another southpaw.

“I got close to a Tyson Fury fight when he didn’t want to fight the Deontay Wilder fight. I’ve been in talks with Dillian Whyte and AJ and some big names.

Jose Ramirez vs. Richard Commey on March 25th in Fresno »