By Dan Ambrose: Shawn Porter feels that Teofimo Lopez has since lost the “intimidation factor” that he had when he was briefly the unified lightweight champion after his victory over Vasyl Lomachenko in 2020, and he thinks that he lacks the polish to defeat WBC light welterweight champion Regis Prograis if the two were to fight now.

Despite being next up in the rankings to challenge Prograis (28-1, 24 KOs) for his WBC belt, Teofimo (18-1, 13 KOs) appeared to rule out a fight with him last week, talking gibberish about him not being able to fight in the U.S. It was transparently clear that Teofimo was ducking Prograis after having previously expressing interest in fighting him.

Porter feels that the 25-year-old Teofimo will to figure out how to make adjustments during the course of his fights if he’s to have a chance of beating fighters like Prograis and other top 140-pounders.

In Teofimo’s controversial 10 round split decision win over Sandor Martin on December 10th, he never made any adjustments in the fight, and was frequently nailed by the check right hook from the Spanish fighter. Teofimo was fortunate not to lose, but the fans saw him as having been given a gift decision by the judges.

“If Teo feels like what he said after the [Sandor Martin] fight, and, of course, we saw him retract that later, but if there’s any doubt, that boy Regis is going to expose it,” said Shawn Porter to Fight Hub TV when asked his thoughts on a Regis Prograis vs. Teofimo Lopez fight.

“Outside of that, it’s a hell of a fight.  What I need Teo to do, and I hope this gets back to him, that intimidation factor he once had is gone. You can’t shake guys up anymore. Now you need real skills, and now you need a real game plan.

“Now you need adjustments that you’re prepared to make adjustments during a course of a fight. Those are things that I haven’t seen from Teo. 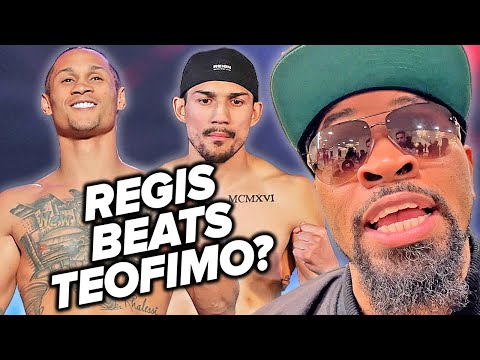 “My dad always said, ‘We train fight-specific,’ meaning that if we’re in with a brawler, we’re going to train to box and do what we need to stay safe and outbox this guy and win this match.

“That’s what Teo and his team need to do. They need to start game planning, and then he can start switching some things up and getting that conditioning up to a level where he can stay focused from round one until it ends.

“Both guys are really explosive. I think I’ve seen Teo more explosive than Regis, but we haven’t seen Regis in the ring with anybody that would show. That’s a hell of a fight.

“The fight that Teo just had against Sandor Martin. That guy is just awkward. That guy is designed to make guys look ugly, look bad, and the list goes on. That fight went the way it was supposed to go. Teo, grow up, learn from it, and move forward.

“Regis, I’ve said for a long time, Regis is the dark horse for 140. He showed it in his last fight [against Jose Zepeda].

“100% Teo against a 100% Regis. I’m going to go with Regis. I think Regis is a little more polished and a little more ready for whatever is going to happen during the course of the fight.

“It’s not about him [Teofimo] getting a new trainer. It’s about his dad expanding what he can do and what he knows. You learn from those guys. I love when boxing is able to put top-tier competition against one another.

“When you walk into an arena, and you don’t know what’s going to happen, that’s the best time to walk into arena,” said Porter.