The energy was eclectic at the inaugural boxing event at YouTube Theater, with fans being dazzled by the main event action featuring Santa Ana’s Alexis “Lex” Rocha (22-1, 14 KOs) and his seventh-round stoppage of Accra, Ghana’s George “Red Tiger”Ashie (33-5-2, 25 KOs). The match, presented in association with Star Boxing, saw Ashie go down in the third round, and out by 2:08 in the seventh. The fight was broadcast worldwide on DAZN.

“I wanted to make a statement,” said Alexis Rocha. “Crawford is next. But if that can’t happen, I want all the big names. I’m signed to the best promotional company in the world, and I know they’ll make it happen. He [Ashie] was a tough fighter, but I knew he wasn’t going to hang with me.” 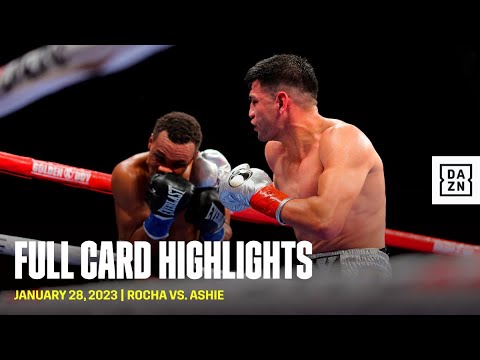 A superstar in the making, Austin, Texas’s Floyd “Kid Austin” Schofield (13-0, 10 KOs) added rounds to his resume in a 10-round match that went the distance against Humacao, Puerto Rico’s Alberto Mercado (17-4-2, 4 KOs) for the vacant WBA International Lightweight Title. All three judges scored the fight 100-89, and Schofield took home the new belt.

“My feet hurt, but it was a good victory,” said Floyd Schofield. “To the fans, thank you for all the love and support, and next time I’ll definitely get that knockout. We want to fight Keyshawn Davis next.”

Indio’s Bektemir “Bully” Melikuziev (11-1, 9 KOs) went straight to business and secured a new belt, the WBO Global Super Middleweight title, and a third round knockout against San Diego’s Ulises Sierra (17-2-3). Sierra went down twice during the match and the fight was stopped at 2:59.

“I’m happy that I just won and as I said before Gabe Rosado is the guy I’m looking for and if not him, anyone,” said Bektemir Melikuziev. “I’m ready. Just give me any 168-lb fight. Thank you to all of my supporters, we’re moving little by little. We’re getting closer to the title shot, we got another title today and we’re looking forward to the world championship.”

Opening up the DAZN broadcast, Oscar “El Pupilo” Collazo (6-0, 4 KOs) of Villalba, Puerto Rico proved he’s well on his way to make history in his division by securing a fifth-round knockout against Monterrey, México’s Yudel “El Guerrerito” Reyes (15-2, 5 KOs). Presented in association with Cotto Promotions, the fight ended at 2:59 with a destructive hook to the body shot by Collazo that sent Reyes almost out of the ropes.

“I feel super good. We did exactly what we wanted to do,” said Collazo. “If we went to the body, we then went back up and that’s how we made it happen. The knockout punch was the hook. We had been practicing since camp so I’m glad we made it happen. I want the champions next. Specifically, The WBA champion, Melvin Jerusalem. So, Melvin, if you’re listening, I want you.”

« Caleb Plant has a bigger ring for David Benavidez fight