At this point, it’s questionable whether the 34-year-old Fury will be healthy enough to fight Usyk in the first half of 2023 because he’s got elbow, hand, and shoulder problems that he must take care of before he can return to the ring.

Usyk hasn’t fought since August, and he’s not going to want to sit out an entire year while Fury slowly heals, licking his wounds from his battle against the old journeyman Derek Chisora last Saturday night at the Tottenham Hotspurs Stadium in London, England.

The injuries could be a sign of age for Fury, who, like his father, looks older than his chronological age. In looking at Fury last Saturday night, he resembled a 40+-year-old person, not a 34-year-old.

With Usyk holding onto three titles, the different sanctioning bodies won’t allow him to sit on his belts for a solid year without defending them against their mandatory challengers. That’s why there’s a good chance that Usyk won’t be fighting Fury next.

One dangerous fight for Usyk could come from his IBF mandatory Filip Hrgovic. That defense is due for Usyk, and if the injured Fury is unable to fight Usyk in the first half of next year, he’s going to need to defend against Hrvovic.

For Usyk, Hrgovic is a riskier fight than Fury because he’s younger, more athletic, and a bigger puncher. Hrgovic is only 30, and he looks much younger than Fury and more spry.

Usyk does well against big, slow heavyweights, and Fury is as slow as they come. All that fat jiggling fat that Fury is carrying around his midsection is going to weigh him down like a heavy anchor against Usyk, and he’s going to get outboxed.

If you’re Fury, it would be a good idea to start working on trimming off that fat now so that he’s not carrying the saddlebags when he gets inside the ring with Usyk in 2023.

It didn’t matter that Fury was carrying around extra tonnage against the 38-year-old journeyman Chisora (33-13, 23 KOs) last Saturday night because he was fighting a domestic-level fighter. But against an elite talent like Usyk, that extra 30 to 40 lbs of flab that Fury carries around with him will do him no good.

“I think Tyson will stop him,” said Frank Warren to Queensbury Promotions, predicting a stoppage win for Tyson Fury over Oleksandr Usyk next year.

“I think he’s too big, much too big for him. I think they’re quite similar and have good boxing brains, but I just think Tyson, everything he’s got, he’s got better than Usyk,” Warren continued.

“Usyk is a really good, he’s a great cruiserweight, and he’s been a good heavyweight. Looking at the two of them, Tyson, in every box that you tick, he’s better. 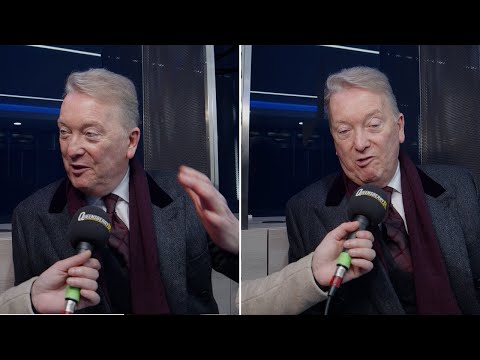 “He [Usyk] couldn’t fight [in December], and he gave his reasons why and we confirmed that’s the fight we’re going to make now. We’re going to work hard to get it over the line,” Warren said about the Fury vs. Usyk undisputed heavyweight match.

“That was a point that I was making before the fight, and it showed,” about the Fury vs. Derek Chisora trilogy.

“Joe is the interim champion. There are great fights to be made, and it’s not going to be hard work to make. We’re not dealing with lunatics, we’re dealing with sensible people, and we’ll get them over the line,” Warren said about Joe Joyce being an option for Fury in 2023.

“Next year, we’re going to have three or four of these going, that’s for sure.

“He controlled the fight from round one. We knew what Derek was going to do,” said Warren about Fury’s trilogy with Chisora. “He just broke him down. He was never in any trouble himself, and he got rounds under his belt, which is really neat.

“He’s his own man and has a plan. I genuinely think he could have stopped him earlier, but you can’t take nothing away from Derek. Derek came to do what he does, which was to march forward and whiz over those right hands, trying to catch him. He caught him with a couple of good shots during the fight, but he’s at a different level from all of them, Tyson.

“The fans loved it. Normally, fans will slope off after a fight. They were all there, and you got two terrific fights. He’s a man of the people, and I think people identify with him.

“You get this before the fight that we won’t sell the tickets, and we won’t do this. It proves time and time again what he is. His fight with Wilder in the States was a record box office. He broke a record at Wembley.

“Today, we could have had much more here, but we had this problem with rails closing, railway station closing down. The only way we could extend it was to cut capacity. Otherwise, we would have had 65 or 70 here.

“Everyone stuck around, everyone enjoyed themselves and had a sing-song. It’s exciting. Daniel Dubois’ fight was very, very exciting. It was too exciting for me at my age. He got himself back into it.

“He got hit with that headshot, and that discombobulated him. A typical first round top of the temple, and he damaged his leg. If you notice, he went down without getting hit. Something was wrong with it.

“You could see in the second round that as he was shaping up, you could see that he could put no weight on that leg. But in the end, his power came out, and I’m quite pleased with the result.

“For a show that was going to be a crap show, it wasn’t again. We had a great show, and the youngsters on the undercard did extremely well,” said Warren.


« Gervonta “Tank” Davis Is Ready To Run Through The Lightweight Division

Devin Haney vs. Shakur Stevenson agree to move Lomachenko to the side »