Ryan Garcia expects Tank Davis to fold like any other fighter

By Allan Fox: Ryan Garcia believes Gervonta ‘Tank’ Davis will crumble like any other fighter he’s faced when he catches him with a big shot in their mega-fight in April.

Ryan (23-0, 19 KOs) feels that Tank’s punch resistance isn’t extraordinary, and he’ll react like any average person if he lands his bread & butter punch on him.

It’s still questionable whether Tank (27-0, 25 KOs) will make it to the Ryan mega-fight because he’s got a risky tune-up against undefeated Hector Luis Garcia (16-0, 10 KOs) on January 7th, and that’s a match that he can lose.

Besides the dangerous fight against Hector, Gervonta reportedly has a court case ahead of him, and there are questions about whether he’ll be given jail time. If the fight doesn’t come off between Tank and Ryan in 2023, at least there will be a lot of interest for when it eventually does take place in the future.

“I just got to keep my focus. Whoever is in front of me, I just train the best I can and take every opponent serious,” said Ryan Garcia on social media when asked about his thoughts on his fights against Mercito Gesta and Gervonta ‘Tank’ Davis in 2023.

‘There are so many options, especially for us being power punchers, that we can catch anyone clean at any moment,” said Ryan Garcia when asked what his prediction is for the Gervonta fight.

“I just expect to win and find any way to win, stop everything he tries to do in the ring. I know that myself when I hit people with certain punches, a lot of the time, they get hurt. So I don’t expect Tank to be any different.

“The next guy I fight, I have to take serious, and the fight with Tank, I don’t look at it as any more special than another fighter in my whole life,” said Ryan when asked about his thoughts on Tank. 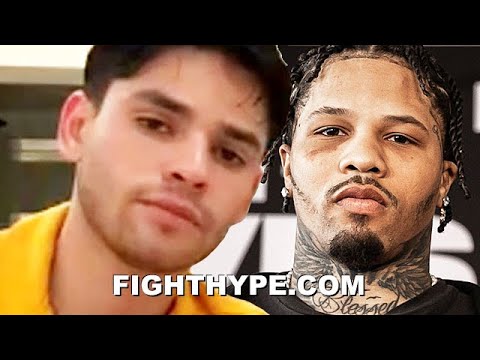 “I just look at him as the fighter he is. When you’re at the top, no fight is going to be easy. So I have to take him as serious as I can, and I expect to win. That’s going to be a great fight, and that’s a fight that boxing has been wanting.

“It’s important because we haven’t had two young, in their prime undefeated fighters go at it in a while. This is my heart, this is what I’m made about.

“I’ve always wanted to do these big fights, these big events since I was a young fighter. I finally get the opportunity, and we’re going to put on a show,” said Ryan.