By Barry Holbrook: IBF featherweight champion Josh Warrington feels that Luis Alberto Lopez is already showing signs of doubting himself with his concerns about his headbutting ahead of their headliner on DAZN this Saturday night at the First Direct Arena in Leeds, England.

Given what happened in Warrington’s last two bouts, with his opponents being badly cut from head clashes, Lopez (26-2, 15 KOs) is understandably concerned about him suffering the same fate on Saturday night.

Kiko Martinez was cut three times in his fight with Warrington last March, suffering cuts over both eyes and on his forehead. Warrington (31-1-1, 8 KOs) ultimately stopped the badly bleeding Kiko in the seventh round in a fight that took place in Leeds.

“I think the Americans are probably going off of the Lara fight and probably going off my broken jaw the last time out. That was only one punch that seemed to do damage in my last fight,” said Warrington to ID Boxing about his last match against Kiko Martinez in March.

“I’ve been in a few fights where cuts have happened,” said Warrington in reacting to Lopez having concerns about his head clashes. “If you have a fighter that pushes forward with his chin down, things happen.

“Mauricio Lara made a big son & dance about it. Too fighters come forward, it happens. It’s like when you have a clash of styles between a southpaw and orthodox, it happens. The thing is,  I’ve been labeled now like I’m doing it deliberately. 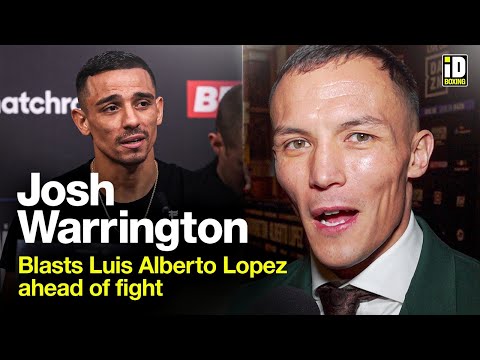 “I keep my chin down and tucked in. It’s a fight. There are times when you’re in close, and your heads rub together. It is what it is. He needs to stop moaning and focus on the job at hand. I feel like he’s a bit doubting in himself already with that.

Will Warrington retire if he loses?

“I’ll never overlook somebody again like I did with Mauricio Lara. I’m fully confident that I’m going to win on the weekend. This could potentially be the last one,” said Warrington.

“He’s wild, he punches from the floor, and every punch he throws, he tries to knock you out with,” said Warrington about Luis Lopez. “That expends a lot of energy.

“They’re quick to jump on I’m old and seen better days, but physically, I’m in my prime. Mentally, I’m more focused than ever.”


« Ryan Garcia expects Tank Davis to fold like any other fighter