Plant vs. Benavidez: Caleb’s trainer raves about his explosiveness

By Sam Volz: Caleb ‘Sweethand’ Plant’s trainer Stephen ‘Breadman’ Edwards believes his fighter is more “explosive” than people realize ahead of his fight in the first quarter of next year against David Benavidez.

Edwards would do well to ensure Plant has worked on his cardio for this fight because if he gasses out late, Benavidez will knock him out just like Canelo Alvarez did.

This is a tough fight for the 30-year-old Plant because he doesn’t match up with Benavidez regarding hand speed, power, size, youth, or in the chin department.

Edwards can say whatever he wants about how Plant has supposedly improved under his tutelage, but he’s the same old fighter that Canelo knocked out. The smooth-talking Edwards is trying to paint a picture of Plant having improved, but he hasn’t.

He’s the same guy he’s always been. Fighting an old guy pushing 40 like Anthony Dirrell can make anyone good, even a light puncher like Plant.

If Plant had fought a young lion like David Morrell instead of the faded old Dirrell, we probably wouldn’t be talking about him right now. Fighting the faded Dirrell has arguably tricked a lot of casual boxing fans, who had no idea who Caleb was fighting.

They thought Dirrell was one of the elites in the division, so naturally, they were impressed when Plant knocked him out. In contrast, hardcore boxing fans know this was good old-fashioned soft match-making to polish up Plant to rebuild him after his knockout loss to Canelo.

The recent ninth round knockout by former IBF super middleweight champion Sweethand Plant (22-1, 13 KOs) over Dirrell last October seems to have given his trainer Edwards the belief that he can do the same thing to other fighters in the division.

Plant’s knockout of the 38-year-old Dirrell was more of a product of the advanced age of the former WBC champion coupled with the fact that he hadn’t faced a quality opponent in three years since his ninth round stoppage against Benavidez in 2019.

Up until the knockout, the Plant-Dirrell fight was appeared close, as Dirrell was landing the better shots while chasing a fleeing Plant around the ring. It was the same stuff that we’d seen from Plant in his fights with Canelo Alvarez and Jose Uzcategui.

Plant ran around the ring, trying to avoid those guys, and gassed out in the second half and took punishment from them. Against Dirrell, Plant landed a lucky shot in the ninth round to score a knockout.

You can’t call it a planned thing because Plant was running for the first eight rounds, and things were looking iffy for him going into the championship rounds.

Hopefully, Plant doesn’t start talking with Benavidez during the contest, trying to befriend him as he did with Canelo because he’s not going to let up on him.

If Plant isn’t good enough, he’s not going to be shown mercy by Benavidez by trying to become his friend during the fight or by looking for validation about his ability or lack thereof.

Plant up against it

“Get this opportunity against a great fighter, and you get to prove yourself. I’m real excited about the opportunity,” said Caleb Plant’s trainer Stephen ‘Breadman’ Edwards to Fighthype about the David Benavidez fight in March or April.

“He’s still a boxer,” Edwards said about Plant. “We’re not trying to turn him into no knockout puncher. He just happened to be a guy that can punch that people say can’t punch. 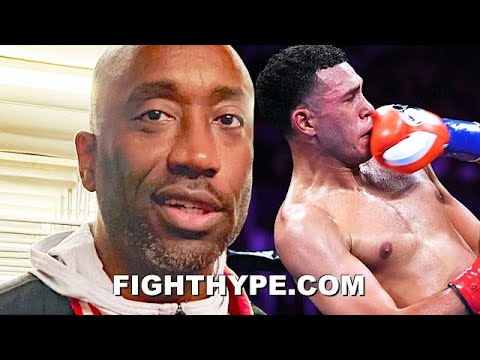 “I let people say what they want. All punches hurt. You get in the boxing, and somebody punches you in the face that’s the same size as you and that’s in shape, anybody can hurt anybody.

“It’s about hitting guys in vulnerable spots that they don’t see. He’s [Plant] a still a boxer. Believe it or not, punching on the move isn’t a bad thing. Punching on the move means the person has got to defend you while he’s tracking you down.

“You know how hard that is to defend yourself when you’re moving towards somebody or moving away from them while they’re punching you? It’s a lot of guys what they do is they move, they stop, and then they punch, whereas Caleb has the ability to punch while he’s moving.

“He’s sitting down on his punches more, and that’s from changing your looks, so you don’t do the same thing over and over again. He’s evolving as a fighter. There’s nothing wrong with punching on the move.

“Sometimes people take that as an insult because he doesn’t sit down on his shots. It’s hard to defend shots when a guy is moving, and you’re going after them. So you’ve got to add different layers to your game and do more than one thing in the ring.

“I’m just telling you that he’s much more explosive than people reason,” said Edwards about Plant. A lot of times knockouts are your temperament. It’s not so much your ability to punch because he’s a pure boxer because he’s a defensive fighter. He hasn’t always gone for the knockouts and put himself in position.

“He’s a tremendous fighter. I’m not going to pick him apart because anyone can be picked apart. Caleb has to exploit some of the tendencies that he has. He’s 26-0 for a reason; he can fight. He’s real, real good,” said Breadman about Benavidez.

“We worked on keeping our emotions in check because we know there was some bad blood going into the fight,” said Edwards about Plant’s recent fight against 37-year-old Anthony Dirrell.

“That was a devastating shot,”  said Edwards about the left hook that Plant knocked out Dirrell with in the ninth round. “The tempo in which he did it, that’s what threw Anthony off more than the actual punch because it didn’t come from a normal tempo.  It came from a different kind of cadence.

“When you get hit like that with a shot that you don’t see, you get your lights turned out,” said Edwards.

Frieda “The Cheetah” Gibbs from Track Star to Boxer! »