Fury wants ‘The Rabbit’ Usyk in February or March

By Charles Brun: Tyson Fury says he thinks he’ll be coming back from elbow surgery to fight in the first quarter of 2023 against Oleksandr Usyk for the undisputed heavyweight championship in Saudi Arabia.

The way Fury looked last high, you have to give a more fit, athletic & technically skilled Usyk an excellent chance of beating him. Fury has become too sloppy & journeyman-like with the lazy fighting style he’s adopted since adding coach Sugarhill Steward to his training team.

Fury no longer fights like an elite heavyweight with his punch & grab style of fighting, and he’s going to have major problems against a talented fighter like Usyk.

Fury (33-0-1, 24 KOs) closed the chapter on his three-fight trilogy with the old gatekeeper Derek Chisora last Saturday night, stopping the painfully slow and poor fringe-level contender in the tenth round in a fight that was never competitive in the least at Tottenham Hotspurs Stadium in London. England.

Supposedly there were 60,000 fans at Tottenham, but it looked sparse, with many empty seats. There are rumors that many of the tickets were given away as complimentary [‘Comps’] rather than sold for this dreadful albatross of a fight that the 6’9″ Fury shoved down the gullets of his loyal fans.

We can only hope Fury faces Usyk (20-0, 13 KOs) next, as that fight needs to happen before the two aging heavyweights get much older. Fury looked like an old 34 last night, and the 35-year-old Usyk is no spring chicken either, but he’s still much more youthful looking than ‘The Gypsy King.’ 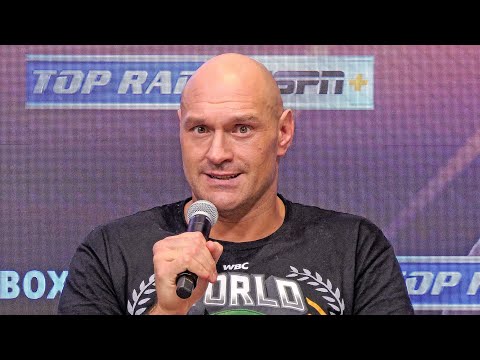 For the naive boxing fans that believe that Fury is as good as he once was, they need to look at some of the footage of his fight against Wladimir Klitschko in 2015. It’s like night and day.

Back then, Fury was an outstanding heavyweight, showing flashy moves and fighting inside & outside.

What we saw last Saturday night was an old flabby heavyweight whose style is the old punch, grab & lean style that John ‘The Quietman’ Ruiz used. The thing is, Fury doesn’t look capable at this point in his career of being anything but a mauler because his body has aged to where he physically resembles his 58-year-old father, John Fury.

“I’m looking forward to a big 2023. I hear all this about ‘big money’ in Saudi Arabia,” said Tyson Fury at the post-fight press conference last Saturday night after his win over Derek Chisora.

“Frank was telling me that it might be in the first quarter of next year in February or early March. So let’s do it. I’m willing, and Usyk looks like he’s willing.”

It’s not a given that Fury will be able to return to the ring so soon after his elbow surgery. With surgery and Fury’s other physical issues, we might not see him back in action before the summer, be it against Usyk or Joyce.

“He just looks like a rabbit. He has two eyes that are far apart, and he has a big gap in his teeth,” said Fury about IBF, WBA & WBO heavyweight champion Oleksandr Usyk.

“I think my dad nicknamed him ‘The Rabbit.’ Call me ‘The Farmer’, and the farmer will skin the rabbit pie and eat him up for breakfast. That’s what we’re going to do with him.

“You can put me at #1 and then the next three in a hat and pick them. Joyce, Usyk, and Wilder. I don’t think there’s anybody in the world that can take Wilder’s power.

“The ten rounds I got in tonight were very, very valuable to take me into the next year,” said Fury.

“Even big Joe joined the party. Joe gate-crashed that party. ‘I want a piece of this.’ I said, ‘Right, let’s have a royal rumble then,'” said Fury.