By Sean Jones: Eddie Hearn says Canelo Alvarez’s two fights he wants for the superstar next year are against Matchroom Boxing stable fighter John Ryder in May in a tune-up style clash and then a rematch with Dmitry Bivol in September.

Canelo (58-2-2, 39 KOs) will, of course, have the final say-so about whether he’ll take those two fights, but it looks like he’ll go in that order.

American boxing fans would prefer Canelo skip the easy work against ‘The Gorilla’ Ryder and fight a rematch with WBA light heavyweight champion Bivol (21-0, 11 KOs) next May on Cinco de Mayo and then the winner of the March bout between Caleb ‘Sweethands’ Plant and David Benavidez.

Few fans want to see Canelo, 32, take another tune-up level fight against Ryder, given that he fought lesser opposition from 2019 to 2021 before finally stepping it up in 2022 against Bivol.

It would be disappointing for boxing fans to see Canelo fight Ryder (32-5, 18 KO), who looked average in his fights against Zach Parker, Daniel Jacobs, and Callum Smith.

Canelo’s idea of taking a tune-up in May isn’t going to help him get ready for a rematch with Bivol because Ryder is nothing like him, and it won’t help.

If Canelo wants to face someone that will get him ready for Bivol, he needs a fighter that has a similar style. Ryder is a slow inside smotherer type of fighter, and that’s not how Bivol fights.

“To be honest, I don’t think Canelo’s performance against Bivol or GGG was quite up to his standards,” said Eddie Hearn to Fight Hub TV last Saturday night.

“Canelo’s plans this year [2023] are maybe John Ryder and then Bivol, but then after that, a Benavidez fight would be very big.

“I don’t see any point in a Caleb Plant rematch. He beat him up and knocked him out after a good start from Caleb Plant. I think the David Benavidez – Canelo Alvarez fight is a big fight if he beats Caleb Plant.  I’ve got to know Canelo, and he would never duck one fight.

“He also feels you’ve got to earn your shot. You can’t just fight nobody and get a shot. I think David Benavidez would agree. He’s boxed nobody so far at the elite level. The Caleb Plant [vs. Benavidez] fight is a fantastic fight and the type of fight that should be getting made.

“If he beats Caleb Plant, I think he can scream from the rooftops for a fight against Canelo, and I expect him to get that. 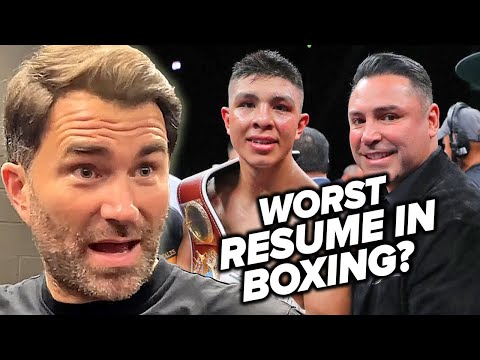 “Obviously, we know that he was carrying an injury. We expect so much from Canelo that if he doesn’t perform like a star every time, everyone starts wondering what’s happening,” continued Hearn about Canelo Alvarez’s poor performances against Dmitry Bivol and Gennadiy Golovkin in 2022.

“We have to give credit to Bivol. It was an incredible performance [against Canelo]. We saw in the [Gilberto] Ramirez fight this guy is a pound-for-pound great as well. At 175, it’s very difficult for Saul to compete with those guys, but that’s what he wanted to do.

“I think it’ll be Ryder. I’d like to take Saul abroad and have him fight internationally. He’s done Las Vegas so many times.

“We had a great run through the backend of Covid, where we went to San Antonio for Callum Smith, we went to Miami for Yildirim, and then we went to Dallas with Billy Joe Saunders, and then he fought in Vegas against Caleb Plant. Now, he’s gone Vegas, Vegas.


« Fury wants ‘The Rabbit’ Usyk in February or March