By Adam Baskin: Eddie Hearn unloaded on Top Rank promoter Bob Arum in full force today, saying that he has “no ambition” and is just trying to put together small shows as “cheaply” as possible to make a little money before getting “out of the business.”

Hearn’s comments were in response to being told that the 92-year-old Arum had criticized him over his pay-per-view predictions for last weekend’s trilogy fight between the Top Rank-promoted Tyson Fury vs. Derek Chisora contest on BT Sport Box Office and ESPN+ from Tottenham Hotspurs Stadium in London.

Hearn feels that Arum lacks ambition at this stage of his life and is just making what money he can on small shows.

The Matchroom Boxing boss Hearn didn’t hold back with his thoughts on Fury defending his WBC heavyweight title against the 38-year-old journeyman Chisora in what he felt was a needless trilogy match after the two had already fought in bouts that Tyson easily won.

“Who do you think knows more about pay-per-view buys in the UK? Me or Bob Arum?” said Eddie Hearn to Pro Boxing Fans, reacting to Top Rank promoter Bob Arum ripping him over his prediction of the buy total for the Tyson Fury vs. Derek Chisora 3 trilogy from last Saturday night.

“A 93-year-old geezer is off his swede on edibles. The guy is completely on another planet,” Hearn continued. “When I say they’re done, I mean that with all due respect. Bob Arum is 92 years old; he has no ambition. 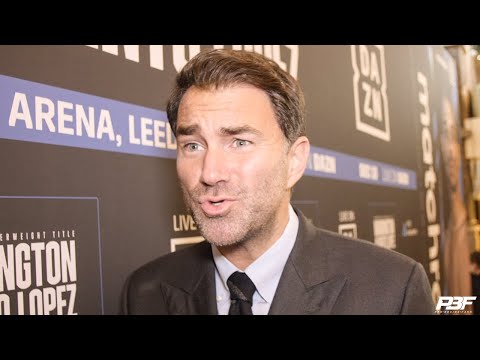 “He’s looking to make as much money, get out of the business, and do shows as cheaply as possible. They’re going to small arenas. Show me what Top Rank has done this year versus what Matchroom has done.

“I didn’t say anything about Bob Arum. He just came out and started slating me. So f**k Bob Arum. He’s done. We’re taking over; off you go. Go and take some of those things you do or whatever,” said Hearn.