By Jack Tiernan: Deontay Wilder’s trainer Malik Scott wants the ‘Bronze Bomber’ to face Anthony Joshua in 2023 after his bout in March against an opponent still to be determined.

Malik believes that a fight between the two former heavyweight champions, Joshua (24-3, 22 KOs) and Wilder (43-2, 42 KOs), is destined to last only three rounds, with his fighter Deontay coming out victorious.

With Joshua losing his last two fights against a smaller heavyweight, Oleksandr Usyk, Scott isn’t sure where AJ is mentally after those two defeats.

He thinks Joshua may need to rebuild himself mentally before taking on Wilder, but with him being a “big-time” fighter, tune-ups don’t make sense for him at the level he’s at right now.

Scott is excited about Wilder’s potential now that he’s learned his new system of fighting, and he wants him to face only the big names in the division because he feels he can beat them all.

If Wilder can’t get Joshua next, Malik wants him to face IBF/WBA/WBO champion Usyk or WBC champ Tyson Fury for a fourth fight between them.

“I think Deontay should be fighting three or four times a year, but that’s in the made-up world right now, especially if we work like we did last October [against Robert Helenius],” said Malik Scott to The Good Fight when asked bout Deontay Wilder’s next fight.

“With his type of power and the way he’s taking to my system that we’re working on right now, that kind of result can happen every fight. What do you do with a guy with that type of freakish power? You have to keep him busy.

“But for the sake of business and for the sake of big fights, and these big fights need to be promoted in a certain amount of time, fights take time. If it were up to me, I would want to see Wilder back in the ring in the first quarter of March.

“I think he should be back in training camp in January. Everything is going to be good according to the schedule. I think he’s big-time boxing, so Deontay should be going into a world title fight.

“I truly believed that Usyk would come to the fight with Helenius because this is what was told. But Usyk has major plans is only focused on Tyson Fury. That right there is the business aspect of it,” said Malik.

Deontay vs. Joshua is an ideal fight

“If it were up to me, Deontay would Anthony Joshua. Deontay, me, and our team want it, but Joshua is having a rebuilding type of conversation,” Scott said. 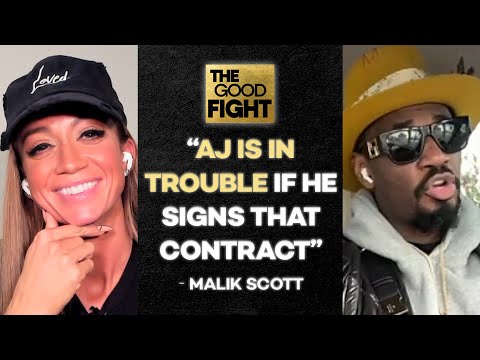 “So it’s all about whoever we can get in the ring, but also meets that top, high-level boxing criteria concerning marketing, concerning the fans, and things of that nature.

“Before the Helenius fight in interviews, I was saying that I want Usyk or AJ next, but since Usyk has declined and made his mind up that he’s only going to wait for Fury, AJ is available. In my opinion, he’s available.

“But mentally, is he available,” said Malik about Joshua. “Physically, he can do it. What I mean by that is he willing to fight Deontay right now? Deontay is ready to fight anybody in the world, especially these names I’m naming right now. The Usyks, the Anthony Joshuas, and even the Fury part four.

“I’m very interested in that. At this level of his career, I would,” said Malik when asked if he would be giving the green light for Joshua to fight Wilder next if he were AJ’s trainer.

“One, the fight was supposed to have been happening, and two, he lost to Oleksandr Usyk two times. Three, I also believe Anthony Joshua is a big-time boxer. These guys are not getting old. Let’s get these big fights made.

“I would hate for so much time to go by, and we end up with another Riddick Bowe – Lennox Lewis type of situation. These greats didn’t get a chance to fight each other.

“These types of fights aren’t just good for boxing. They’re good for the world, for culture, and for the young kids that want to see this kind of fight.

“So, I just think it should happen, but we can want it all we want. AJ has to want the fight, his team has to want it, and Eddie [Hearn] has to want to do good business.

“Him and Shelly [Finkel] have to connect to make this happen. Otherwise, Deontay is going to do bigger & better things, whatever that may be. I hope he doesn’t do much that he wants to fight my fighter, Deontay Wilder.

“This is what I do understand. The lack of mental strength might not be there because he lost to a smaller guy. To go up against a specimen like Deontay Wilder, you may need to build yourself up to take on that kind of fighter. I get it.

“The advantages and the things I see Deontay doing to whatever Joshua shows up. Mentally tough, not mentally tough; it’s a three-round fight, in my opinion. He can’t get out of the way.

Joshua should train with Goosen

“I think Joe Goosen is the perfect match for someone like AJ,” said Malik. “Why? That’s speaking for here in America. You’ve got a great coach Barry Robinson who is always available to do good business and is always willing to work with anybody, listen, and take to his system.

“If we’re talking about here [U.S]. They [Team Joshua] came to Los Angeles, and they didn’t even stop to see Joe Goosen. I don’t understand how. Joe Goosen is a legitimate Hall of Fame trainer that has done everything in boxing. He’s a drill master.

“You’re going to be drilling every day, he’s a motivator, and he’s articulate with the instructions. He’s calm, he’s cool, and he’s done everything that could possibly be done. But it seems like they’re going everywhere, in my opinion, that’s not a good fit for AJ.

“I think what AJ needs is Joe Goosen. Goosen has the recipe.

“In the Deontay Wilder-Tyson Fury first fight, Deontay’s feet were a lot faster, and his high hand was up a lot higher. What did that do? It gave him a lot more time to counterpunch against Tyson Fury.

“Those little small things help in high-level fights. In the second fight, his high hand was low, and Tyson’s hands were high, and he was able to maul Deontay a little bit more.

Now what you noticed in the third fight, Deontay did a lot of decoys in the first four rounds. He was going to the body, he was going to the shoulder. He was looking down and shooting up. He was trying different things.

“In my opinion, he had more success in the third fight than he did in the second fight,” Scott said.

“I’m not crazy about the fight,” said Malik about Wilder potentially fighting Andy Ruiz Jr in a WBC-ordered title eliminator. “The markets there, when I think about it. Andy is Mexican, he’s tough and a former heavyweight champion.

“If Deontay clips Ruiz, which I believe he will do if the fight takes place, people are going to look at it, ‘Andy is tough but.’ That’s just how humans think.

“Me, how I think, ‘Oh man, we beat Andy Ruiz. He was tough, he was fast. But if we’re talking about the state of the viewers, they won’t view it like that. Andy can fight. I’m just really big on Deontay fighting Usyk or Anthony Joshua or Tyson Fury for a fourth time,” said Malik.