By Craig Daly: Caleb ‘Sweethands’ Plant says, “don’t be surprised” if he knocks out David Benavidez when the two fight in the first quarter of next year in a final WBC super middleweight title eliminator on Showtime.

‘Sweethands’ Plant (22-1, 13 KOs) has made improvements with his punching power with the help of new trainer ‘Breadman’ Edwards, and he’s also more elusive on defense than he was.

Plant is as slippery as an eel but can now administer electric-like incredible, shocking power to his opponents. In Plant’s last fight, he knocked Anthony Dirrell out cold in the ninth round last October.

“Yeah, 100%,” said Caleb Plant to Fight Hub TV when asked if the contracts are signed for his WBC super middleweight title eliminator against David Benavidez in the first quarter of 2023.

“Once we get the details worked out, there will be more to talk about,” said Plant when asked when there will be an announcement for the fight. “Hopefully, in the first quarter of the year, we’ll get it locked in.

“We got a few big cities locked in, but I’d love to have it in Vegas. So, we’ll see how it works out. This is a legacy fight for me. I’m super excited about it. It’s one that I’ve wanted for a long time, and I feel like it’s perfect timing.

“It sounds like he may never be happy. I don’t know,” said Plant when told that Benavidez’s dad, Jose Sr, is worried that Caleb might pull out of the fight.

“I’m not really concerned with anything he has to say. He’s not a fighter. He’s never fought. So he’s a sideliner. The same as it would whenever we would have fought with me getting my hand raised,” said Plant when asked how the fight with Benavidez will go down now that he’s recently improved. 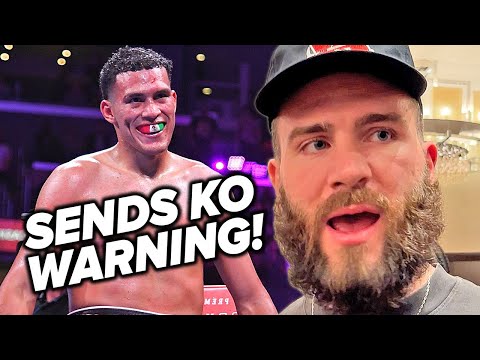 “Me and my dad and [trainer] Breadman [Edwards] have been working on a lot of things. Breadman has been a great addition to the team. Great chemistry and a lot of things that I’ve been doing. He’s definitely added his own spice and flavor to it, and it’s been going well.

“Don’t be surprised,” said Plant when asked if he can see himself stopping Benavidez like he did against his last opponent, 37-year-old former two-time WBC 168-lb champion Anthony Dirrell. “If Ronald Gavril can drop him, so. But we’ll get that all worked out soon.”