Bob Arum says Fury vs. Usyk could get announced next week

By Sam Volz: Bob Arum says he believes he could have an announcement by next week for the Tyson Fury vs. Oleksandr Usyk undisputed clash.

Arum states that the Fury-Usyk fight could take place in the Middle East or possibly at Wembley Stadium in front of 90,000+ fans in London.

The Top Rank promoter Arum believes that IBF, WBA & WBO heavyweight champion Usyk (20-0, 13 KOs) is the only fighter in the division that can give WBC champion Fury (33-0-1, 24 KOs) a run for his money.

Some might say that Joe Joyce, the improved Deontay Wilder, and Anthony Joshua could give Fury huge problems in addition to Usyk. If Usyk doesn’t defeat Fury, you’ve got to give the next guy up, Joyce (15-0, 14 KOs), a chance of doing a job on him.

“It was a pretty one-sided fight, but it’s really hard to imagine a heavyweight that can compete with Tyson Fury,” said Bob Arum to Fight Hub TV, reflecting on Fury’s victory over Derek Chisora last Saturday in Great Britain.

“I think of all of them, Usyk has the best chance. Usyk is a very good friend of mine. I don’t promote him, but I’ve always been friendly with him. 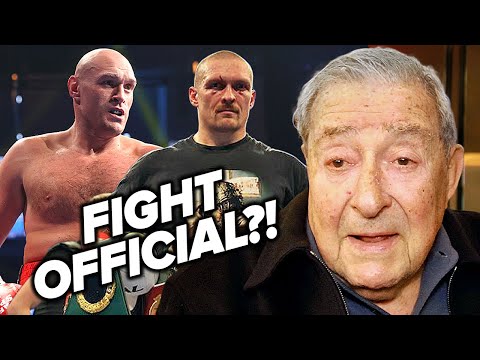 “He’s been friends with Lomachenko, and I know I know him very, very well. I think he’s capable of giving Tyson Fury a good fight because he’s very brave, and he’s a tremendous boxer,” said Arum.

There will be a lot of excitement next week if the Fury vs. Usyk fight is announced because fans are eager to see this match-up.

“I think both fighters want the fight, and that’s a step in the right direction,” said Arum when asked how close he is to making the Usyk vs. Fury fight. “We’re not fielding offers from around the world, and hopefully, by next week, we’ll be able to have an announcement.

“It could be in the Mideast; it could be at Wembley [Stadium] in front of 95,00 people.  Right now, the Brits support boxing like no other place in the world. We did 60,000 for Fury’s fight with Chisora, which was a sellout.

“You’re only allowed to put 60,000 in the stadium. When he [Fury] fought his previous fight [against Dillian Whyte], it was in a different municipality, and they allowed us to do 95,000 [at Wembley Stadium in London], and we sold every seat. So there’s nothing like the British fight fans,” said Arum.